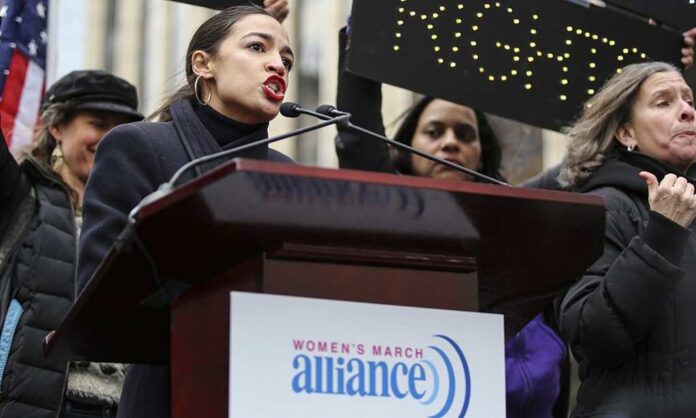 Rep. Marjorie Taylor Greene (R-GA) has been endearing herself into the hearts of conservatives due to her decision to finally stand up to New York Rep. Alexandria Ocasio-Cortez and her distinct brand of militaristic warfare against conservatives.

According to Greene’s Wednesday tweet, Rep. Alexandria Ocasio-Cortez (D-NY) has agreed to debate her over the Green (no relation) New Deal and many of its frustratingly unrealistic and unnecessary components.

Ocasio-Cortez and the more aggressive progressives take great pains to frame the Green New Deal as Congress’s way of combatting “climate change” and “global warming,” the idea of which has taken Democrats by storm.

According to Breitbart’s report, the two House members from decidedly opposite sides of the aisle are going to be debating, per Greene’s tweet which included a photo of the New York Democrat.

“I’m glad I ran into you today … to plan our debate about the Green New Deal. After I finish reading all 14 pages, as we agreed, I’ll schedule time for our debate. #MTGvsAOC,” the tweet read.

Greene also wrote, “[Ocasio-Cortez’s] Green New Deal will destroy the US’s oil and gas industry just after we become energy independent from President Trump’s #AmericaFirst policies. Our ability to export oil and gas gives the US great negotiating power in the world. China and Russia love the GND.”

In subsequent tweets, Greene continued to poke the Bronx bear, making comments like “I read your 14 page Communists manifesto @AOC. Looking forward to debating you,” and adding the #MTGvsAOC hashtag to her comments.

Later, she said, “@AOC is nothing but a climate conspiracy theorist spreading fear that we will all be in peril if we don’t heed her demands. Democrats are on the verge of destroying America’s economy, future, and enslaving us to China with the Green New Deal…Apocalyptic climate predictions have been around for a long time.”

And later she said, “The deranged Democrats are obsessed with using these conspiracy theories to pass radical changes to the US. The people will suffer from high taxes, high energy costs, massive inflation, and more. Say no!”

The entire very public even began when Greene invited Ocasio-Cortez to a televised debate on April 14. She tweeted, “I’d like to challenge you to a debate on the Green New Deal economic policy. Since you sponsored the Green New Deal and have a degree in Economics, I’m sure you are more than qualified.”

She continued, “I just have a degree in Business Admin and have owned a construction company for 20 years. A debate between AOC and I on the Green New Deal economic policy would be informative for the American People. They deserve to hear the two sides with pros and cons.”

“You can choose one moderator and I choose a moderator,” Greene added. “Then we can negotiate a major news network to host the debate. Let’s do this for The People. What do you say?”

Ocasio-Cortez has made a name for herself championing the cure to  “the climate crisis.” She even went so far as to compare it to “racial justice” on Thursday stating,  “We must recognize in legislation that the trampling of indigenous rights is a cause of climate change, that the trampling of racial justice is a cause of climate change.”However, this isn’t her first ridiculous and over-the-top comment about the Climate. In 2019, Ocasio-Cortez  claimed, “The world is going to end in 12 years if we don’t address climate change.”