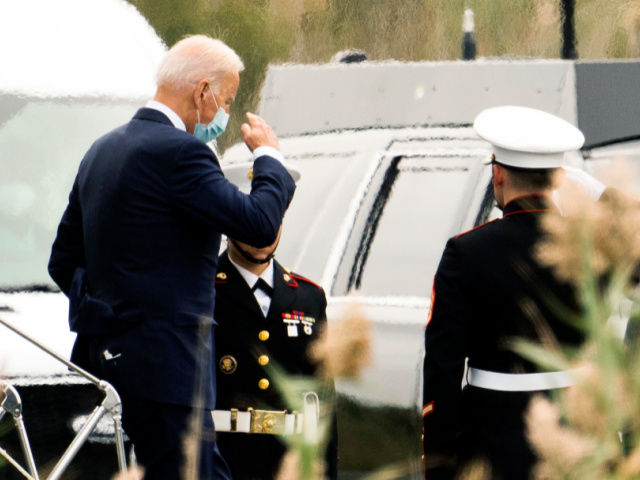 The president left at around noon for his vacation home in Rehoboth Beach.

Biden did not talk to reporters during the trip. White House press secretary Jen Psaki also did not hold a press briefing on Friday, leaving the White House silent for the day.

After Biden arrived at his vacation home, bad news began piling up.

The Pentagon announced Friday afternoon that the drone strike launched against suspected terrorists in Afghanistan last month was actually a “tragic mistake” that killed ten civilians, including up to seven children.

No one killed in the drone strike was associated with ISIS.

Later in the afternoon, the Food and Drug Administration announced their decision to reject a plan for Pfizer’s coronavirus vaccine booster shot for Americans under 65, an issue the Biden administration has pushed for weeks to help further reduce coronavirus cases.

Shortly afterward, France, America’s oldest ally, announced their decision to recall their ambassador to the United States in protest of Biden’s announcement to provide nuclear-powered submarines to Australia without consulting them.

The decision angered the French when Australia canceled a $90 billion submarine deal with their country and made a deal with the United States.

Overnight, news of another increasing border crisis continued as a makeshift migrant camp under a Texas border bridge grew from 2,000 migrants on Monday to over 12,000 by Friday.

Biden is also struggling to get his $3.5 trillion entitlement package passed, as a meeting with Sen. Joe Manchin (D-WV) did not go as planned.

Manchin reportedly resisted the president’s lobbying effort, telling the president he would only settle for a bill that cost $1.5 trillion.

Only 44 percent of Americans approved of his performance in office while 50 percent disapproved.

Biden’s support for handling the coronavirus also fell to 48 percent, the first time his support fell below 50 percent on the issue.