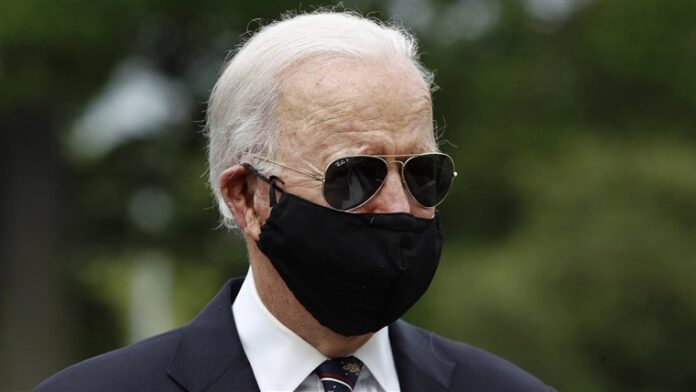 It has long been thought that Joe Biden is not the person that is really in control of the United States. His actions point that other people are telling him what to do and how to do it. Even his speeches are showing signs that someone else is dictating what he should say on camera. He is the only president in history who refuses to answer questions, but now it seems that his words have explained why.

Biden is told not to answer questions for an unknown reason. But once in a while, his mouth gets the best of him, and he instinctively allows reporters to ask him questions.

At a speech he gave on the progress of fighting the virus, the silly old president stated that “And as much as the temptation is to stay outdoors on this beautiful day, I’ve got more work to do. Thank you all very, very much. Bye-bye.”

But one reporter was able to ask a question before he could leave. The reporter stated that “You chose to wear a mask as you walked out here. What message were you sending by wearing a mask outside alone?”

“What message were you sending by wearing a mask outside alone?”

BIDEN: “By watching me take it off and not put it back on until I get back inside.”

It was a simple question to get the hypocritical president to think about the duplicity of his actions not matching up with his words. The president stated the confusing words, “By watching me take it off and not put it back on until I get inside.” Which made every scratch their heads.

But it was not until he said, “Look, I’m sorry. I’m going to — this is the last question I’ll take, and I’m really going to be in trouble.”

It was right then and there that the world found out that Biden is not the actual president of the United States. His COVID speech was a well-written piece of nonsense that was designed by someone to keep the pandemic going as long as possible.

Biden made mention that the country has a long way to go if it is going to be able to open up at all in the near future. His goal is to have everything under control by July 4. But in most areas of the country, things are already back to normal.

The crazy president admits that the numbers are falling, and people are not being infected at an alarming rate. This is proof that the virus has run its course, and it is time to let people out of their liberal prisons.

Biden said that “Today, in less than 100 days, more than 67 percent — two thirds of our seniors — are now fully vaccinated and more than 80 percent of seniors have had at least one shot.  That effort has resulted in a drop of 80 percent in deaths among American seniors, a 70 percent drop in hospitalizations.”

If his words are true, then things should be opening up. But in Biden puppet land, things keep getting tighter. People are being told to stay at home, and businesses keep getting shut down.

With so much mystery surrounding his words and actions, the revelation he gave about getting in trouble clears up a lot of questions. There is someone that the old man will have to answer to if he does not shut his mouth.

The people want to know who that person is, giving him his speeches and calling the shots behind the scenes. The Democrats hijacked an election and put a man in office that no longer has the ability to think for himself. He has to rely on people to cover for him and take cheap shots from the media just so they do not find out the truth.

Joe Biden is not only a danger to the country, but he is a danger to himself. The person that he will have to answer to is the person of interest.

The policies and regulations that Biden puts out have been socialistic in nature. The people who control Biden have only one thing in mind: to change America from a land of freedom to a land controlled by evil Democratic dictators.