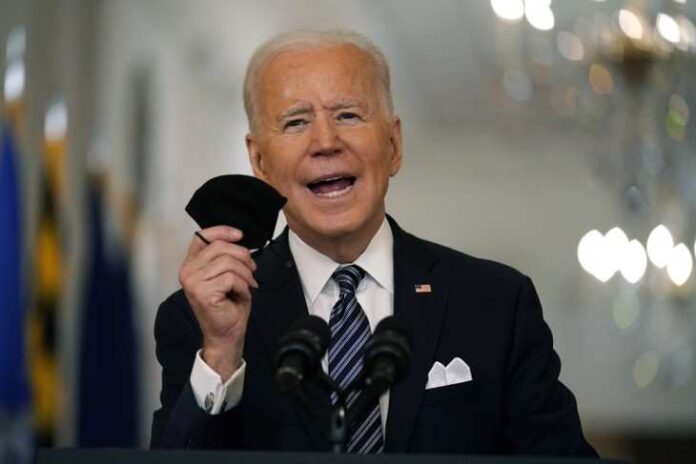 Joe Biden is the masking wonder that seeks to place a permanent mask on the face of America. COVID-19 has long since been on the way out of American history. Numbers continue to fall, and life is slowly getting back to normal. But if Joe Biden has anything to say about it, people will be living under the pandemic rules for many years to come.

Biden comes out on the stage every time he tries to give a speech wearing his black mask. His ever-changing list of rules continues to confuse people. And to add to the long list of confusing statements, he mentioned that people who have received the vaccine no longer have to wear a mask except in large groups.

The ironic part is that if his words were valid, he would not be wearing one himself since his body carries the vaccine. But his public pushing of the rules continues to confuse people to the point that needless actions are being taken at great expense.

Biden tries explaining why he worse a mask outside despite new CDC guidance saying he doesn’t have to pic.twitter.com/8mVF6vjqHX

Liberals add to what Biden tells people, and it is leading to health issues far greater than that of the virus. Maggie Williams attends school at Summit High School in Bend, Oregon. As a student, she is forced to cover her face with a mask. And she must do it while running in races during Track and Field events.

Her races are the one place that she should not be wearing a mask. It has long been thought that people are suffering from oxygen issues from wearing the mask. Liberals deny the truth behind the theory. But Williams’s issue at the finish line of her race puts that theory to the truth.

As she came across the finish line, her body collapsed onto the ground. Her coach stated that “I’ve been doing this for 31 years, I’ve never seen anybody basically lose consciousness. I’ve never seen that in the way it happened with Maggie.” And it was found that her issue was the mask kept her from getting the air she needed to live.

An Oregon high school runner collapsed at the finish line of her 800 meter race. Why? Her coach says she was deprived of oxygen because Oregon is requiring masks on OUTDOOR HIGH SCHOOL SPRINTERS. Insanity. https://t.co/piqnHy4xyC

Her injury could have been avoided by following commonsense. But instead, the school made her wear a mask while running, which led to her falling down and suffering a concussion in the process. She did go on to break her record but was lucky not to break her neck in the process over a fear-forced set of rules by people that have no idea what they are doing.

John Canzano is one reporter that noted, “What high school runners in our state need right now is for the state to help them get to the finish line safely. Distance runners are being required to wear masks while competing. Most of them are fine wearing them while warming up. But once they’re on track, outdoors, competing in the open air, the science just doesn’t support the necessity.

“I felt like I just wasn’t being able to get a full breath…I just felt super-dizzy, and then eventually passed out.”

Maggie Williams shares her struggle competing with a mask on, which sparked change from OHA. https://t.co/0YNcfvttmq

The fact is that Oregon is a state-run by liberals that love to watch people fall apart under the rules they push on them. The state of Washington does not even have such ridiculous rules for their outdoor athletics. The shocking part is that there is no case of the virus that would even mandate such extreme actions.

Once Maggie Williams hit the ground, the shock of what happened caught the ear of many people. The Oregon Health Authority decided that track stars would not have to wear a mask any longer. They just don’t want to be held liable for any lawsuits because of a rule that they have nothing to back it up with.

Oregon’s governor Kate Brown still has learned nothing from Williams’s ordeal. She is in the process of ordering 15 counties to be classified as “extreme risk.” These counties will have to essentially shut down and lock all doors’ People will be forced to stay indoors and live like they are in prison because a governor thinks they know more than the experts do.

Brown is also expected to order churches to limit seating or keep crowds to less than 100 people. The dictator mentality runs high in the Democratic Party. They just will not let go of the power they have living under the virus.