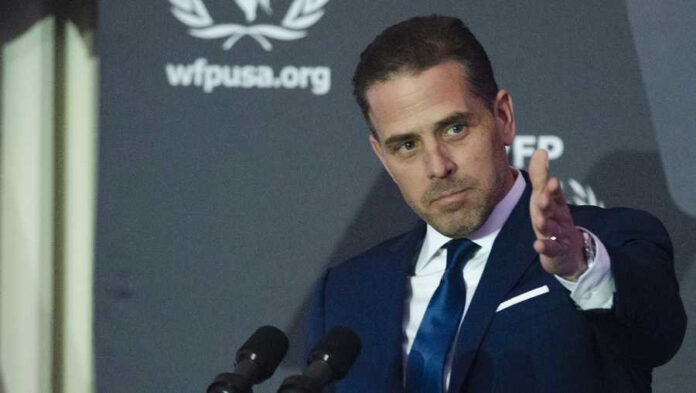 Quick! Hunter Biden is in need of a new job. Now that his daddy is the president, jobs have to be a bit more legitimate than sitting on the board of a Ukrainian energy company.

Without any teaching experience, Hunter has landed a position at Tulane University in New Orleans. Clearly, the school isn’t in the habit of drug-testing their professors.

The class that Hunter will be teaching is on “Media Polarization and Public Policy Impacts.” For those not in the know about this lingo, it’s about fake news.

Wait, a man who has no background in media and no professional teaching experience is going to teach this course? In a paid position? At a university level?

Liberal media would love Americans to believe that Hunter Biden has been the victim of fake news for years. He’s not really a drug addict. He didn’t really go into business with China. He really is a standup citizen. Yeah, right.

The course syllabus promises to “explore the current state of the media landscape in the United States and how media polarization, fake news, and the economics of the news business impact public policymaking in Washington, D.C.”

Did they give this speaking gig to the wrong Biden? Hunter Biden has no experience with the media or public policymaking. If their hope is to misinform an entire class at Tulane, they’ve succeeded.

Hunter Biden joins James Comey in proving that law breakers always have a career in academia if all else fails. https://t.co/FvzNGCEmi3

Otherwise, this is just another way to show that President Biden looks for any way to help his son make a buck. The only way that Hunter could ever land such a gig is by being the son of the present.

“How to get Big Tech to suppress real stories about you” https://t.co/GMXYXZxCLW

Charlie Kirk, the founder of Turning Point USA, was one of many who had something to say about Tulane’s announcement on Twitter. Kirk wrote that this class was proof that college is a waste of time and money.

It seems that everyone finds it amusing that Hunter Biden is teaching such a class, yet Tulane is serious about the class as well as their choice for a guest speaker.

The Deputy Digital Director at the National Republican Senatorial Committee even offered up an alternative title for the class: How to Get Big Tech to Suppress Real Stories About You.

Others were quick to point out that the panel of guest speakers does not feature a single conservative voice. This would mean that the class may be more of a “how-to” on creating fake news as opposed to ensuring that the media gets the story right.

Not a single conservative voice on a Tulane panel about “fake news.”

Anyone who is connected to Biden (or Obama or the Clintons) who fails manages to rise to the top. Why? They end up landing careers that they are in no way qualified to have. Liberals take care of one another, even if it means being as ridiculous as they can with the positions that a person can land.

Perhaps the next job that Hunter Biden will get will be at the Massachusetts Institute of Technology. There’s got to be the need for a professor who can talk about laptops, right? Or, maybe he’ll teach over at Harvard to talk about making business deals in Ukraine or China. The possibilities are endless.

Jill Biden was quick to correct the world that she was Dr. Biden. Hunter will follow in her footsteps by asking to be addressed as Professor Biden. Anyone who fails to recognize his new title is sure to find themselves at the wrong end of Twitter’s misinformation policy.

Way to go, Tulane. You’ve truly outdone yourself with the appointment of Hunter Biden to discuss fake news.