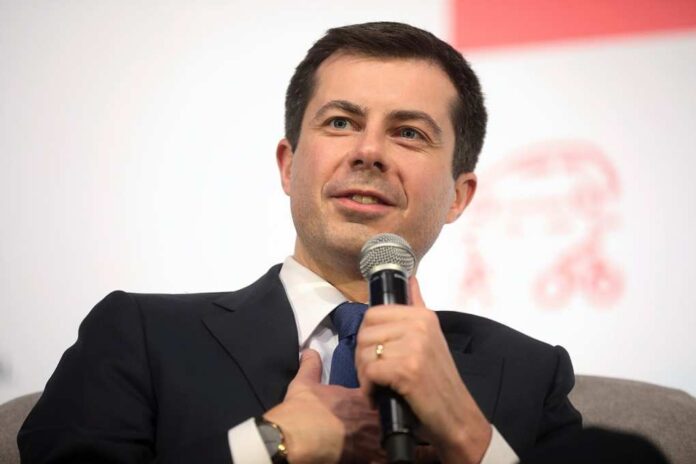 Oh…Pete Buttigieg. He could have been a contender. As the former mayor of South Bend, Illinois, and a former presidential candidate, he spoke of great things for the United States.

Not too many people ever took him too seriously. He didn’t offer enough political background. He was entirely too liberal in what he wanted to offer Americans. And, he didn’t have great reviews as mayor.

Now, as some time has passed, Americans have started to have buyer’s remorse about Biden. He was what was leftover as everyone else simply dismissed themselves out of the primaries. Buttigieg dropped out once enough polls showed that he couldn’t hold his own against Biden, Sanders, and Warren.

Of course, Buttigieg was able to snag a great position since Biden handed them out to the various candidates like candy. Serving as Transportation Secretary, Buttigieg was recently interviewed – and reminded us all why we didn’t want him as president.

He said that “The U.S. shouldn’t be too proud to learn from other countries” in regard to infrastructure. He wants us to look to the examples set by other countries – and this includes communist China.

The former mayor thinks that we should be looking at becoming number one by paying attention to what the other countries are doing – including Japan, Spain, and China. He pointed to such things as high-speed train systems as a reason for wanting to do what they do.

Although Buttigieg is rallying behind the Biden administration’s plan to spend trillions on infrastructure, he’s failing the liberals in the process.

We’d love to have a high-speed train – but let’s face it – that’s not going to happen.

The Biden administration has recently analyzed countries to determine “infrastructure quality.” China came in at #3 while the U.S. was way behind at #13.

Buttigieg recommends that we keep up with our competitors, including “a strategic competitor like China.”

Most people will agree that we don’t need to be doing anything like China. They are breaking humanitarian rules in the way that they treat their workers. Not only that, but they’re also a communist country that wants to keep tabs on every resident.

If we treated workers like dirt and paid them subpar wages, we could have a high-speed train, too. However, we care more about quality of life than that.

Many have said that China may be the last country we want to compare ourselves to, and it’s not just because of being a communist nation. Said Business School published a story in 2017 to say that the investments in China have done more harm. “The evidence suggests that for over half of the infrastructure investments in China made in the last three decades the costs are larger than the benefits they generate.”

If the U.S. is not going to get economic value but rather destroy it, we hardly want to use Communist China as an example of how we need to improve our infrastructure plans.

Plenty of research has gone into the infrastructure projects seen in some of the “model” countries that Buttigieg boasts about. The problem is that the positive is only seen in the short-term. The projects create jobs, and once the projects are done, there’s no longer a positive for the economy.

The Democratic Party has become the party of ideas. Someone shouts out an idea and the Biden administration simply twirls it into a trillion-dollar plan. There’s no one there to censor the thoughts or determine whether it’s going to have the desired payoff in the long-term.

At least there’s one good thing that came out of Buttigieg’s interview. We were reminded that he’s never going to be a good presidential fit for the U.S.

BOMBSHELL: Biden Family Scored $31 Million from Deals with Individuals with Direct Ties to the Highest Levels of Chinese Intelligence