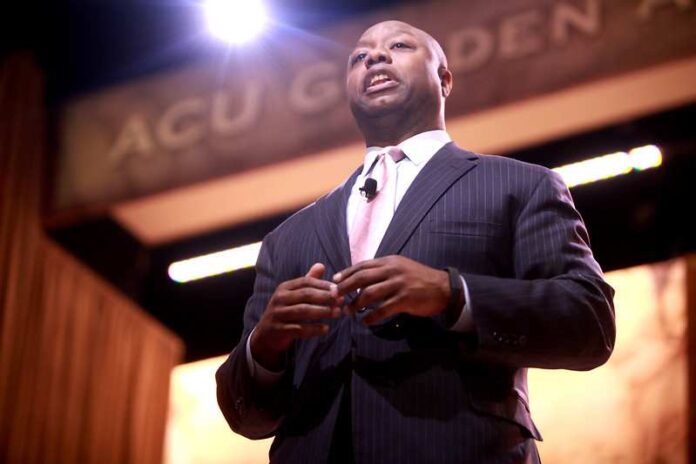 Joe Biden is quickly becoming the most significant mistake made in 2020. Voters are now looking back and wishing that they could change their vote to the Republican side. Biden promised unity and lots of good times ahead. But once his bottom hit the rocking chair, those promises turned to dust. And he quickly started making decisions that started to divide the nation and take jobs away from people that need them to survive.

The old president wanted to help people get back to normal. But he pushed them back into the dark ages by insisting that people mask up and the schools stay closed. By the time he developed his sorry plan, many states had already opened back up and returned to school with no issues. He wanted to force the open states to close so he could have the credit of opening them back up.

Republicans are not taking the president’s sorry agenda laying down. Senator Tim Scott called out Joe Biden after he made his divisive speech. Scott got on camera and tore into the president’s speech and showed how destructive it was and how Biden was tearing the nation apart.

The senator stated that “We just heard President Biden’s first address to Congress. Our president seems like a good man. His speech was full of good words. But President Biden promised you a specific kind of leadership. He promised to unite a nation. To lower the temperature. To govern for all Americans, no matter how we voted. That was the pitch. You just heard it again. But our nation is starving for more than empty platitudes. We need policies and progress that bring us closer together.”

It is evident to listeners that Biden had broken all of those promises that Scott mentioned in his speech. The united nation became a fractured nation. A cooler environment has become a heated battleground where terrorists take what they want, and the innocent are blamed.

COVID-19 was a tragic event for everyone. Scott noted that families had lost loved ones, and many business owners had lost everything. Biden saw to it that churches were shut down and kept closed until the courts said they could open. Not once has Biden ever supported the freedom to worship in America.

The Democrats have taken up both sides of the rope and are trying hard to pull the country in two. They cry when they are confronted and attack when they are left alone. And somewhere in the middle, they are destroying values that define what the country is all about.

Scott showed the world the inconsistencies behind Biden’s speech. His words were empty and self-centered. But the Democratic-controlled media would praise him till their airtime had expired.

Scott hammered on the president’s policies to keep schools shut down. He said, “Most of all, I am saddened that millions of kids have lost a year of learning when they could not afford to lose a single day.”

The reality sets in when Scott rightfully mentions that “Locking vulnerable kids out of the classroom is locking adults out of their future.” He understands the future impact that the Democrats miss by being unplugged from reality.

Joe Biden has done nothing to combat the virus. All he has accomplished doing is taking credit from a former president that put his reputation on the line and made decisions for the benefit of the people. So far, Biden has torn down that legacy and replaced it with illegal-based nonsense that makes no sense at all.

Scott made perfect sense when you pointed out that “Our public schools should have reopened months ago. Other countries’ did. Private and religious schools did. Science has shown for months that schools are safe. But too often, powerful grown-ups set science aside. And kids like me were left behind. The clearest case for school choice in our lifetimes …”

Biden only wishes he could make a speech half as good and truthful as Scott can do. All the senator did was tell the truth of reality and the picture that defines President Biden. The old man just sits in his rocker and tries to keep up with reality.