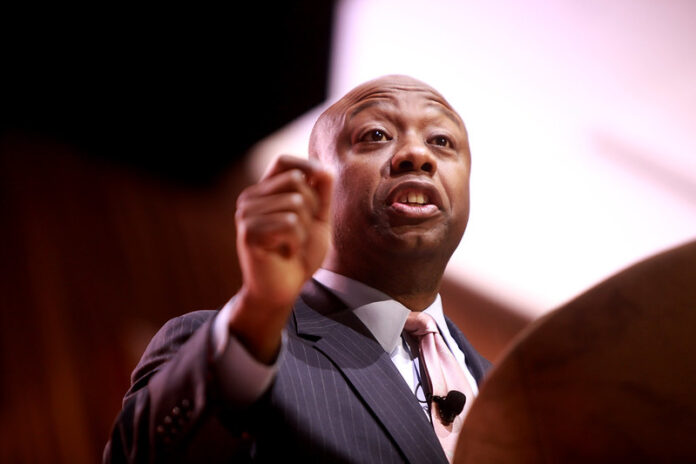 Republican Senator Tim Scott is the one man telling the truth about the speech provided by Joe Biden. The president’s speech was full of lies, and half thought out concepts. When Scott took the stage to expose the hypocrisy, he turned the heads of the illustrious Democrats. He went on to rip apart the loony liberals and put clarity to a confusing speech.

Senator Scott is a man of color who hates the liberal poison coming across the country. The Democrats took social media platforms to attack his words against Biden and suggested that he was working for his white overlords.

The senator blasted the crazy liberals that called him “Uncle Tim.” That statement is a racial slur used to indicate that a black man is just doing the will of their slave owners. But when Scott heard about the terrible things that were being said of him, he came out swinging and called into the error of the statements.

Scott stated that “It is stunning in 2021 that those who speak about ending discrimination want to end it by more discrimination.” He points out very clearly that nasty liberals invent racism to get what they want out of people while at the same time making claims of wanting to end the very thing they create.

He proved that the Democrats want to reverse discrimination against white people to feel better about themselves. The liberals see white conservatives as the violators of racial issues. They are content to tell them how to make restitution without it affecting themselves.

Scott very clearly stated that “Did we not learn the lesson the first time around? I’ll just tell you that it has been an amazing morning with so many good people calling. But the Left, they have doubled down. They are not going to attack my policies, but they are literally attacking the color of my skin. You cannot step out of your lane according to the liberal elite Left.”

The Democrats want to claim that Scott is the slave of white Republicans is offensive and damaging. Sunny Hostin from “The View’ is noted as saying that Scott’s color is why he was picked to speak out against Biden’s lies.

Hostin racially stated that “Why was he chosen to give this rebuttal? He was chosen because he is the only black Republican senator. He is that person. He is the person that Republicans want to put out front because of the problem of racism in this country and he knows that. So I was sort of disappointed that he was used in this way and didn’t take that opportunity to address that type of — this type of issue head-on. That was a disappointment to me.”

The United States of America is the least racial country in the world. In all reality, it just does not exist. It is a country that welcomes diversity and cultural heritage. The Democrats need to make people believe that racism exists to use it for their political desires. They need it to flood society because they cannot exist without it.

The country, according to Scott, has made a lot of progress in the past century. There was a time when slavery had divided a nation, but now it has moved beyond the need for division and is demanding unity and healthy relationships. But the liberals hate the idea of a unified nation because it would mean that America is strong and powerful in a world that hates freedom.

Scott noted very clearly that “Today, kids are being taught that the color of their skin defines them again — and if they look a certain way, they’re an oppressor. From colleges to corporations to our culture, people are making money and gaining power by pretending we haven’t made any progress at all, by doubling down on the divisions we’ve worked so hard to heal.”

Somehow the Democrats have led millions to believe that racism can be fought with racism. The only way it can be dealt with is to teach kids that skin color does not define a person. It is what is within the person that matters most.