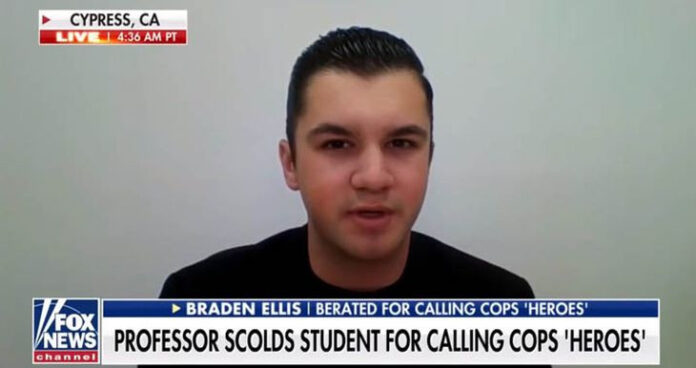 As a student studying business at a community college in southern California, Braden Ellis has a college experience like most of us enjoyed. However, a recent presentation in a required communications class recently led to some very bizarre conversations. We thought that college was a place where different points of view could be shared but the woke mob is putting a stop to that.

It is sad to think of all the children who are going to be ostracized from their peer groups because of their willingness to think differently. In a presentation for a required communications class, he argued that cancel culture has gone too far and he wants the police to be considered heroes.

He was particularly worried about the removal of positive police portrayals from television shows and movies. If you are anything like us, you are still chuckling about the people who seriously wanted the children’s television show Paw Patrol removed from the airwaves. The cartoon dogs who stop various low-level baddies from stealing pies and cheating at relay races have to be stopped and they have to be stopped now.

If you let the liberals tell it, this is the exact world that they want to live in. They do not want police officers in their neighborhoods or even on their television sets. Once the presentation was over, the adjunct professor who was running the communications class decided to pick a fight with the young man. The professor wanted to know more about what point he was trying to make.

Does this sound like bad faith engagement to you? It sure is! The professor knew exactly what Ellis was talking about and wanted to see if they could get him into any more trouble. The argument took place over Zoom and was eventually picked up by Ben Shapiro’s Daily Wire.

The professor makes some outlandish claims if you take the time to watch the clip. They claim that fugitive slave patrols are “the whole reason we have police departments in the first place.” This is a common argument from the liberals but it does not make it a true one. Policing arose in other areas of the country for reasons that had little or nothing to do with slavery.

Time magazine has examined the history of policing and they have some interesting findings:

“The first publicly funded, organized police force with officers on duty full-time was created in Boston in 1838. Boston was a large shipping commercial center, and businesses had been hiring people to protect their property and safeguard the transport of goods from the port of Boston to other places, says Potter. These merchants came up with a way to save money by transferring to the cost of maintaining a police force to citizens by arguing that it was for the “collective good.”

During the 20th century, a push took place and nationwide policing was finally established:

“The late 19th century was the era of political machines, so police captains and sergeants for each precinct were often picked by the local political party ward leader, who often owned taverns or ran street gangs that intimidated voters. They then were able to use police to harass opponents of that particular political party, or provide payoffs for officers to turn a blind eye to allow illegal drinking, gambling and prostitution.

This situation was exacerbated during Prohibition, leading President Hoover to appoint the Wickersham Commission in 1929 to investigate the ineffectiveness of law enforcement nationwide. To make police independent from political party ward leaders, the map of police precincts was changed so that they would not correspond with political wards.

The drive to professionalize the police followed, which means that the concept of a career cop as we’d recognize it today is less than a century old.”

The professor has decided to take a leave of absence for the rest of the semester. She was not planning on returning next semester, so at least she won’t be back. No nuance allowed!