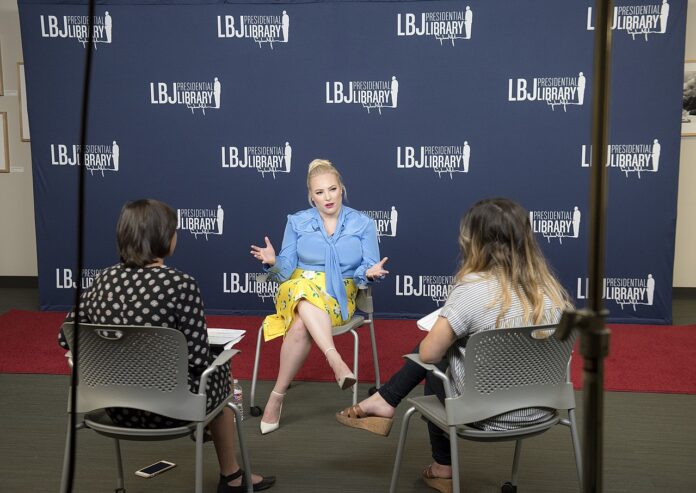 As it turns out, some things are even too much for the children of the RINO’s when it comes to progressive talking points. Such was the case when ABC’s “The View” co-host Meghan McCain has come out against her fellow hosts and their show saying she believes that they are part of an under-representation of conservative subjects and the “mainstream media” for a lack of “fairness,” according to Independent Journal Review.

McCain’s barrage of accusations came on Wednesday when she went off on her co-hosts, calling herself the “token conservative” in “mainstream media.” She also had some choice words on the under-representation of conservative viewpoints in the mainstream media today.

“What I have found interesting working in what I consider liberal media is not the stories that we talk about, but the stories that we don’t talk about. There’s been a lot of stories, for example, we’ve never once talked about Hunter Biden as a hot topic on this show, whereas Ivanka Trump or Donald Trump Jr. cough in the wrong direction and it probably would’ve taken up the first two blocks.”

McCain’s sign of sense comes after months (or maybe years?) blasting former President Donald Trump and warm cuddly serenades about the President Joe Biden, saying he was like an uncle to her, and a brother to her late father, Sen. John McCain.

McCain’s loyalty may well be slipping, however, if Wednesday’s frustration is any gauge for how she’s feeling about the Biden administration.

The political pundit also came out saying that she is not in agreement with the two stories that Fox News ran that turned out to be wrong and said the network should apologize for them. This was one indication that while McCain might feel conservatives are underrepresented in the media, she’s still not ready to actually talk about supporting one.

What McCain was addressing was the situation in which Fox News recently made corrections to two stories, “The first claimed that President Joe Biden’s climate plan wanted to limit Americans’ consumption of burgers. Another story claimed that migrant children were being given copies of Vice President Kamala Harris‘ children’s book as a welcome gift,” IJR reported.

However, McCain was quick to say she believes in what Fox News and other networks were doing, and that they should exist because “everything else is liberal.”

“There’s a reason why Fox is killing it in the ratings and laps everyone else,” McCain said. “It’s because it seems like it’s rigged.

It’s rigged every place else. You think Jim Acosta isn’t an activist? I don’t have any trust in people on CNN. I take such umbrage at this entire concept that liberal media which runs all of media, all of tech, all of entertainment, all of music, all of culture, all of politics, all three branches of government, I’m supposed to feel bad there’s two things from Fox News that have been inaccurate?”

“I mean, let’s go down the list of things that are inaccurate on CNN and NBC. And then, we can talk about fairness in the media,” McCain said near the end of her diatribe.

While the daughter of the late senator from Arizona didn’t give any examples of what other networks were publishing that was wrong, the neverending cycle that is the liberal media means that without watchdogs to inform the public, we have no way of knowing how extensive wrongdoing is in the Democrat party.

According to IJR, Fox smoked its competition in ratings over last week averaging 2.24 million viewers during its primetime programming, compared to MSNBC, which came in second with an average of 1.58 million viewers.