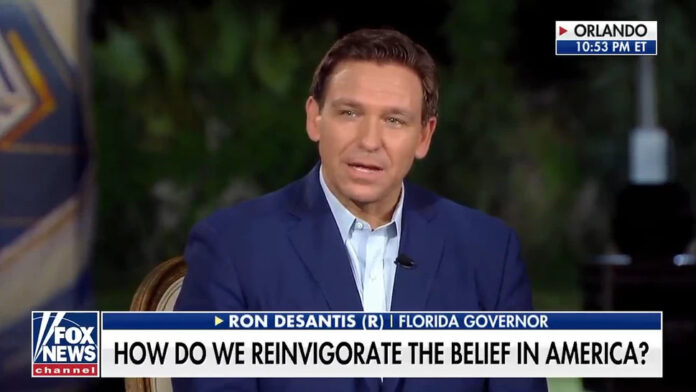 The Democrats are allowing all kinds of atrocities into the country that are splitting things right down the middle. Their latest attack on the youth of America comes as they allow biological men to put on a dress so they can compete with girls with the purpose of making themselves feel more girly. A man may want to wear a dress, but it does not make him a biological girl. He will always have the genetic coding that makes him faster and more robust than the girls he is beating upon.

The issue is getting a stiff arm in the face by Republicans refusing to permit such actions from taking hold in their states by passing legislation that will forever ban men from beating women. One frontrunner in the battle for identity is Ron DeSantis. He is already known in liberal camps as a liberal destroyer.

He has already told the country during an interview that he is going to sign a bill that bans biological males from competing with girls in their sports field. He made this revelation when Laura Ingraham interviewed him in a meeting with Republican leaders.

The host was particular with her questions. She came out and asked, “Governor DeSantis, a bill of a similar nature is about to cross your desk. Are you going to sign it?”

Gov. Ron DeSantis on protecting girls from having to compete against biological boys in sports: “We’re going to protect our girls.” pic.twitter.com/9KytnM4z3u

Each person on the panel stated that the daughters were going to protect from the insanity of the liberals. DeSantis was quick to note that “Oh, yes. We’re going to protect our girls. have a four-year-old daughter and a one-year-old daughter, and they’re very athletic. And we want to have opportunities for our girls. They deserve an even playing field. And that’s what we’re doing, with what Mississippi did, with what Florida did, and I know what other states are going to do. So, I look forward to being able to sign that into law.”

Joe Biden is so concerned with the liberal poison that he is willing to destroy the country to see that insane people who want to dress up differently than they were created can be accepted on paper. Biden states that the Equality Act “will all change under Americans watching at home, especially young people who are so brave, I want you to know your president has your back.”

Biden’s policy is going to destroy sports as it is known today. A man is always a man no matter what chemicals he puts into his body. He cannot change the fact that he will be able to beat up on girls. This may make him feel more significant than everyone else. But in reality, more than 50 percent of people will never support men playing as girls. A little under a third of people would consider supporting the decision.

Prominent Republican governors band together with DeSantis by standing together and telling the president that the law will never be allowed in their states. The NCAA may even threaten to pull out of those states, but it will not matter when it comes to protecting girls from predators that want to act like a girl so they can get at the girls in the locker room.

Ingraham noted that the NCAA has stated that “Inclusion and fairness can coexist for all student-athletes including transgender athletes. We’re committed to ensuring that NCAA championships are open for all who earn the right to compete in them.” There is nothing fair about letting a male compete with girls that cannot keep up with the male because he is built differently.

Governor Reynolds noted very clearly that “I’m going to do what is right for my state. I’m going to do what’s right for girls. I’m a mom of three daughters and a grandmother of three granddaughters who compete. And it’s the right to do. They should have the same opportunities. And we’re working on legislation, too. I should have that to my desk by, hopefully the end of this legislative session, and we’ll be signing that bill.”

Americans need to be protected from liberalism. And it will take the collective efforts of all conservatives to keep their poison from infecting innocent people.