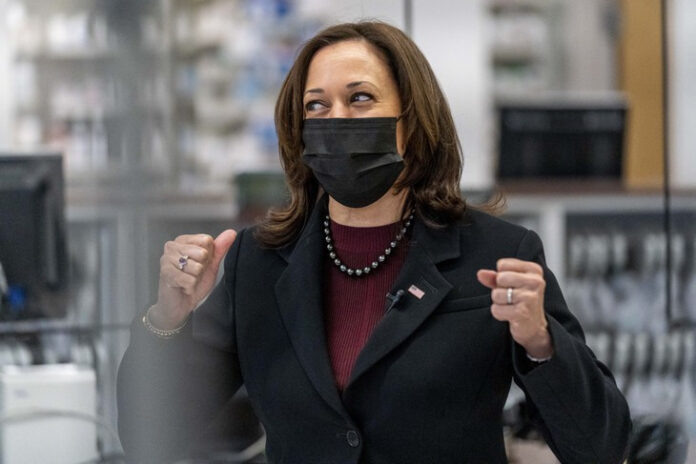 Kamala Harris is padding her resume as she gains a ton of job titles without doing any work. In her twisted mind, she thinks that a title means everything in the world. But in all reality, it is the skill set that matters to people looking for employees. And so far, she has failed at every task her forgetful boss has assigned her.

The president’s little girl has just been assigned the job of overseeing the National Space Council. This new job title is part of the package that she must work on. But so far, her body imprint is what defines the chair that she sits in.

Her new job title is just one of many hats she is supposed to wearing as the vice president. But instead of actually doing work, she sits around and prides herself on all the names she can call herself. After all, it would be a shame if she actually got to work and did anything of value for the country.

Joe Biden claims that he is creating jobs. And for the time being, he can at least take credit for creating one job position after all the millions he has destroyed. The president’s first 100 days in office are marked with meaningless gestures. All he has done is used his pen to erase everything good in the country.

Biden and Harris are both praised by the media for doing absolutely nothing. The data that should back up their claims is conveniently missing. But the maniac media would never disclose anything about their lack of substance.

As I’ve said before: In America, when we shoot for the moon, we plant our flag on it. I am honored to lead our National Space Council.

The creation of one job title for a coworker is not an accomplishment. It is instead a man living in a delusional world. The only thing that Biden is good for is destroying jobs and breaking promises. So far, he has not delivered one promise that he made during his campaign. But to his credit, he has delivered a lot of broken promises to people.

Joe Biden gives a lot of praise to his wife for doing absolutely nothing in her position as the first lady. The exciting thing about Biden’s wife is that she continues along her merry way doing her routine instead of engaging in her duties as his wife. She should be dealing with the teacher unions that are continuing to plague her husband. But when a couple is seeking power, they are willing to ignore their spouse just too ahead in life.

Along with the other worthless positions that Biden’s circle seems to occupy, Harris’s job will be to head up the space council. It must be said that Harris has absolutely no experience with space matters or any astronomical data. She is even mentally challenged to know which way is north and south in America.

It would seem to be a good idea that the old gal should find the barn in case there is an emergency. But she cannot haul herself out of Washington long enough to even deal with many issues that are floating around the country that is now her responsibility.

The immigration queen still has not appeared at the southern border. She believes that the crisis that people keep talking about does not exist. And if she never sees it with her own eyes, she can deny that it is a problem.

But after all, the job title of border czar sounds fantastic to her ears. She can put it on her resume the next time she has to look for a job in the next three years.

Biden stated her new title at a speech he was trying to give. He somehow thinks that she is going to be able to find space. Harris will have to be told that space is up and the ground is down. Or she will never be able to do any job with the space program.

Harris and Biden are the worst couple ever to enter the White House. The pandemic pair love their masks, and they have no intention of changing that rule because it allows them to cover their lying mouths and worthless facial expressions.