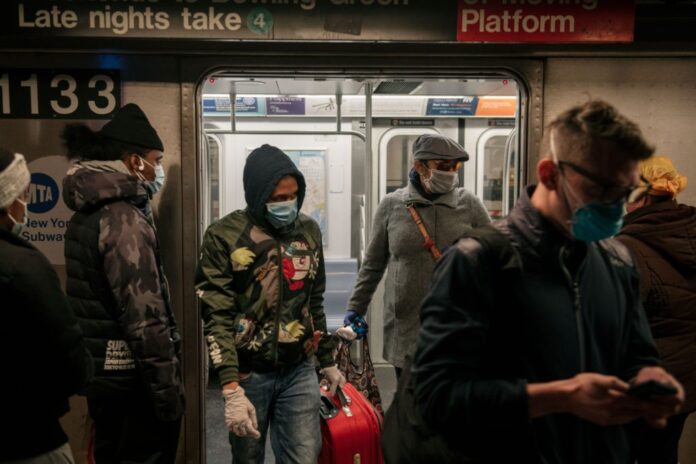 For months, the MTA, which is a government-chartered corporation that operates public transportation in the city, has required passengers on buses and subway trains to wear face coverings.

“But too many people still aren’t following it, and the Metropolitan Transportation Authority says its warning period is over,” according to the report.

The MTA released a statement about its new “stern stance,” and warned riders that going barefaced will cost them.

A woman without a protective mask rides a subway on March 9, 2020 in New York City. (Jeenah Moon/Getty Images)

“We need everyone to do their part and mask up. We know this is what our customers want. They told us they feel safer when they see their fellow customers wearing masks,” said MTA Chief Safety Officer Patrick Warren. “It’s the ultimate sign of respect.”

Face coverings are already required by state and federal law on buses, trains, and in enclosed stations — though the Biden Administration recently announced it is doubling down on its federal mask mandate by increasing the fine for violations on public transportation.

“We appreciate the majority of travelers each day who voluntarily follow the requirement, but find this action necessary to maximize the protections for those who use and work within the transportation system, and to contain COVID-19,” TSA Administrator David Pekoske, said. “By doubling the range of penalties, we seek to reinforce the importance of voluntary adherence.”