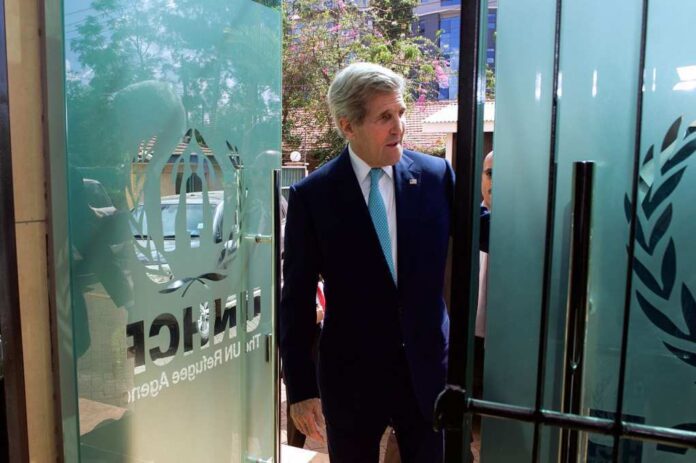 Former Secretary of State John Kerry has been keeping a low profile as of late. He’s kept his obnoxious trap shut in hopes the spotlight will fall on someone else. Fortunately, a group of Republicans has banded together to not let Kerry off the hook so easily. He has some serious ties with Iran and inquiring minds are demanding to know.

In an audio recording not intended for the general public, Kerry is heard revealing top-secret information concerning Israel having attacked Iranian interests in Syria well over 200 times, and how they are continuing to do so. How do you say, “warmongering Democrat?”

As one would expect, Kerry adamantly denied the allegations, but there is only way surefire for him to squirm out of his self-created mess. If the group gets their way, Kerry is going to have to answer a series of difficult questions.

“Iran poses an existential threat to Israel, the United States’ key ally in the Middle East, and it has repeatedly demonstrated its willingness to attack Israel directly, both through proxies and from its positions in Syria. Given the gravity of the security threat Iran poses to the U.S. and Israeli interests, we respectfully ask that you fully investigate these allegations.”

Here are the five questions the group is demanding answers for.

Was the Department of State aware of these allegations before they were reported by the New York Times?
What is the status of Special Envoy Kerry’s security clearance?
What were the circumstances surrounding the alleged leak of information from former Secretary Kerry to Mr. Zarif, including the timing of the alleged conversation?
What role has Special Envoy Kerry had in the formulation of the Biden Administration’s policy on reentering the JCPOA?
Are you aware of any follow-on attacks made by Iranian proxies against Israel or its forces after Special Envoy Kerry’s alleged conversation with Foreign Minister Zarif?

The letter continues, “On April 25, 2021, the New York Times reported that former Secretary of State John Kerry informed Mr. Zarif, ‘to his astonishment,’ that Israel had attacked Iranian interests in Syria at least 200 times. Special Envoy Kerry has also admitted that he secretly met with Mr. Zarif twice during the previous Administration to undermine President Trump while his Administration planned to withdraw from the deeply flawed Joint Comprehensive Plan of Action (JCPOA) and restore the United States’ ability to deter Iranian aggression.”

There you have it. Kerry was hoping to create a military conflict between Iran and Israel for the sole purpose of undermining Trump. The lengths the Democrats will go to are amazingly unbelievable. Kerry gave no thought to casualties, both military and civilian, and no thought concerning the additional disruption of any hope for peace in the region. He hated Trump more than he loves his country. It’s evident.

GOP Rep. Andy Barr, when asked about the potential investigation said, “If this report is true, Secretary Kerry severely undermined the American-Israeli alliance to provide intelligence about one of our most trusted allies to the world’s largest state-sponsor of terrorism. John Kerry and Joe Biden have proven to be pro-Iranian before by championing the failed Iran Nuclear Deal, but this type of betrayal of a staunch ally is simply unconscionable. We need the Inspector General to launch an immediate, impartial investigation to determine the validity of these claims.”

New York Rep. Lee Zeldin took things a step further by calling on Biden to immediately resign, but of course, we all know his request will fall on deaf ears.

With enough ongoing pressure, the Kerry investigation will more than likely receive the green light. When it does, you can bet your sweet conservative behind that both Kerry and Biden will be holding up three fingers as they’re going down. And if the Republican’s accusations are indeed true, nobody will be coming to their rescue. Nobody.