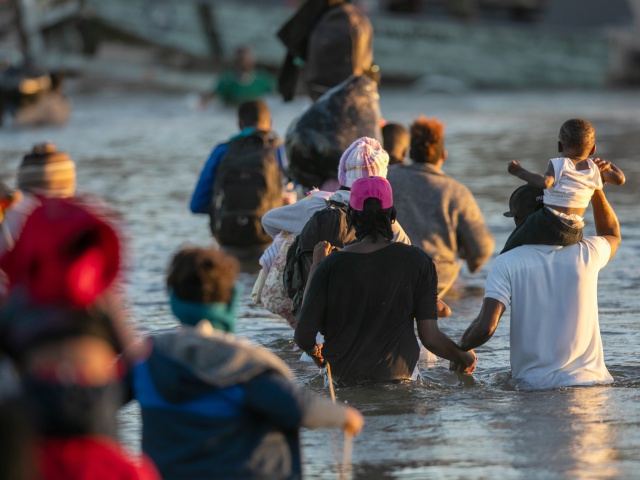 In an op-ed for Fox News, Judd writes that the total number of border crossers Biden has released into the U.S. — including Unaccompanied Alien Children (UACs), family units, and single adults — is upwards of 600,000 since late January.

The massive Catch and Release operation ensures border crossers and illegal aliens are released into the U.S. with only notices to appear in immigration court or notices to report to the Immigration and Customs Enforcement (ICE) agency.

Data from 2019 found 9-in-10 border crossers given the notice to appear in immigration court never show up to their court hearings. Instead, the overwhelming majority live illegally across the U.S.

Judd writes that these 600,000 border crossers are in addition to the more than 300,000 illegal aliens the Department of Homeland Security (DHS) has estimated have successfully crossed into the U.S. via the southern border over the last eight months.

Haitian migrants, part of a group of over 10,000 people staying in an encampment on the U.S. side of the border, cross the Rio Grande river to get food and water in Mexico, after another crossing point was closed near the Acuna Del Rio International Bridge in Del Rio, Texas, on September 19, 2021. (Paul Ratje/AFP via Getty Images)

Catch-and-release is the single biggest driver of illegal immigration right now. If we reward people for crossing our borders illegally, they will continue to come. [Emphasis added]

Although official statistics are difficult to come by, as Sen. Ron Johnson discovered on Tuesday, agents will tell you over 600,000 of the illegal border crossers have been released into the U.S. under catch-and-release since Biden took office 8 months ago. [Emphasis added]

Add that to the more than 300,000 illegal border crossers that were detected but evaded apprehension, otherwise known as “gotaways”, and this administration has added almost 1 million illegal aliens to our population this year alone. And the year isn’t over yet. [Emphasis added]

The estimates come as DHS Secretary Alejandro Mayorkas revealed Sunday the Biden administration has most released at least 12,000 Haitian border crossers into the U.S. interior over the last couple of weeks.

As Breitbart News chronicled, the recent mass release of Haitians into the U.S. interior by Biden’s DHS was in response to a surge of about 15,000 Haitian border crossers taking shelter at a makeshift camp in Del Rio, Texas.