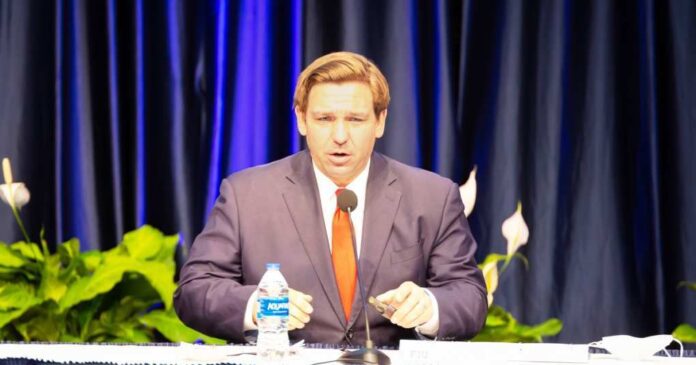 Republican Governor Ron DeSantis from Florida is once again willing to go toe to toe with President Biden’s administration. He filed a lawsuit against the White House administration on Tuesday on behalf of his state claiming that the “ideological” Biden White House is pursuing a “destructive and illegal” catch-and-release border policy. He believes this policy is leaving Florida’s citizens vulnerable.

DeSantis stood right next to Florida Attorney General Ashley Moody on Tuesday afternoon in Fort Meyers. Together they described how the Biden administration policy has led to a record number of illegal alien encounters with United States Customs and Border Protection (CBP) in recent months. They also noted that there have been more than 1 million encounters in 2021. The governor described this as a “total disaster.”

DeSantis focused specifically on the Biden administration’s unofficial “catch-and-release” policy. This allows illegal immigrants who have been captured to claim asylum and then remain in the United States until their claims can be heard in an immigration court. This process can take several months.

In contrast, the Trump administration’s solution called for immigrants who are seeking asylum to remain in Mexico until their claims could be assessed.

The governor noted how clear it was that open borders was the Biden administration’s policy. He believes they want a massive, illegal migration into America and they are purposefully farming out people into communities all across the United States.

DeSantis declared that we are in a crisis that is Biden’s own making and that the continual release of immigrants on a mass and unprecedented scale will burden state and local governments with health, financial, economic, and public safety costs.

He backed up his statement with border numbers that indicate thousands upon thousands of illegal immigrants are now inside the United States.

The governor is ready to take legal action against the federal government. On Tuesday, he not only filed a suit against the Biden administration, but he also issued an executive order that prohibits all Florida agencies under his purview from facilitating illegal immigration into Florida. The only caveat is if it is required by federal or state law. DeSantis is also requiring the collection of information from state officials on the scope and costs of illegal immigration in Florida. This is  according to a local Miami NBC affiliate.

The governors actions come on the heels of a Haitian migrant crisis at the border. There were more than 10,000 asylum seekers taking refuge under a bridge in Del Rio, Texas. They were waiting to encounter the border patrol and be allowed into the United States.

The Biden administration did expel some of the Haitian migrants through Title 42, which allows the U.S. government to immediately deport any migrant over COVID-19 concerns. But there were thousands more who have reportedly been allowed to enter the country to await an immigration hearing.

The Florida governor has gone toe to toe with the Biden administration repeatedly over the past several months. Most of the encounters have been over COVID-19 restrictions suggested by the Centers for Disease Control and Prevention (CDC). But he has also opposed the Biden administration on border policy. DeSantis sent around 250 Florida National Guard troops to the U.S. border earlier this summer to assist in controlling the border crisis.

Obviously other states will be watching this lawsuit from Florida and there may be more to come.