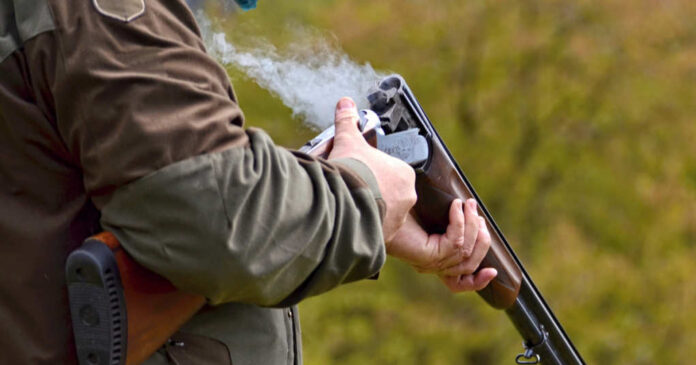 Welcome to America. If you have a gun, you’re welcome to use it – as long as you do so in a responsible manner. In Florida, that includes not only defending your home but also helping out the sheriffs in town.

Sheriff Leeper has issued out a public warning about a murderer on the loose inside of Callahan, Florida. He has told the community that “This guy is dangerous. If you’re in a home and he breaks into your home and you have a gun, blow him out the door cause he’s like a rabid animal. He will kill you with his mindset. What he did to that deputy, was uncalled for, unnecessary and he needs to pay for it.”

Whoa. What in the world did this guy do?

35-year-old Patrick McDowell is a wanted man. He allegedly shot Joshua Moyers, a Nassau County Sheriff’s Deputy during a routine traffic stop this past Friday.

The New York Post has already shared that Moyers is not expected to survive. He is being kept alive until an organ match can be found.

McDowell shot the sheriff’s deputy in the face. Then, after collapsing to the ground, he shot the deputy again, this time in the back.

Well, at least we know why Sheriff Leeper is inviting the entire community to gun down McDowell. He is a former U.S. Marine, so the search is going to be a complicated one.

Further, it is believed that McDowell shot a police dog when searchers were able to get near him on Friday. The K-9 was injured but is expected to survive the trauma.

It’s obvious that the police feel as though they need a bit of extra help to catch this murderer on the loose in Florida. And, they’re turning to those who are already armed.

The liberals want to pretend as though anyone with a gun is a bad guy. However, if it were up to the liberals, all of the people in Callahan, Florida would be sitting ducks until McDowell decided to kill again. That’s not fair to any of these people. And, as the sheriff pointed out, this is a dangerous mindset.

It’s a kill or be killed kind of situation going on.

And, the police don’t have a problem with gun owners knowing what’s going on – and inviting them in on the hunt.

This is where it can actually be beneficial to have gun-owning Americans in place. In many instances across history, it was a civilian who was able to take down a criminal. Why? They happen to be in the right place at the right time – and with a gun. They can take down the criminal instead of waiting for the police to show up.

Republicans are a lot more likely to give Americans the benefit of the doubt. They don’t treat us like morally bankrupt morons who can’t tell the difference between the innocent and the guilty.

Most people who shoot in self-defense are actually shooting to defend themselves. If a red-blooded American with a gun sees a criminal committing a crime in broad daylight, they’re going to shoot. And, that person becomes a hero because they were able to save lives. Otherwise, if we were to wait for the police to show up, that criminal could have ended the lives of who knows how many.

Now that those in Callahan, Florida have been given a green light to blow this criminal away, there’s a very good chance that they will. And, if they don’t, the criminal should at least think twice now that he knows people are armed and looking for him.

This is all a perfect example of why we don’t need the liberals pushing any more gun control laws on us.