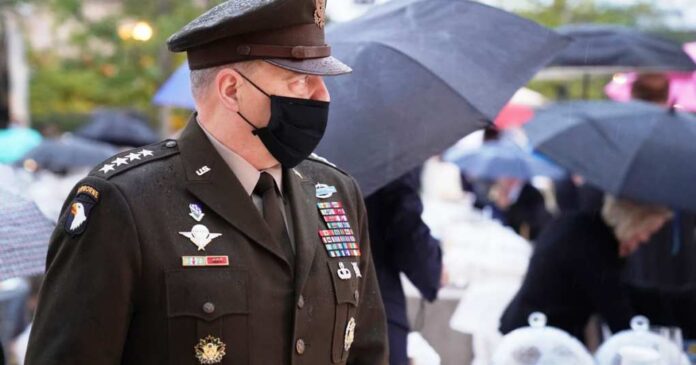 Things aren’t going so well for Top U.S. General Mark Milley who right about now wishes he’d have gone into the insurance business like his dear old dad. Donkeys and Elephants alike are stomping all over the decorated military leader as he’s attempting to stutter through a barrage of questions he’s having difficulty answering.

The general is being called to account for the Pentagon’s disastrous handling of the Afghanistan withdrawal in which he led the charge. Lawmakers say he’s been avoiding the issue in favor of trying to recreate his image away from that of a failed military leader.

Republican lawmakers are steaming over Milley’s decision to hop in bed with reporters over the damning accounts of Trump’s final days being portrayed in books by anyone who can snag a publishing deal.

They’re also upset by the new revelation that Milley told the Chinese they had nothing to worry about with Trump when intelligence revealed Bejing was worried the president might want to start something. This is exactly where Trump wanted them to be until Milley stuck his nose in the chop suey without the authority to pick up that set of chopsticks.

Milley’s turned into an on-stage actor with vivid stories of his past heroism as a way to divert the issues of bypassing his chain of command and his degradation of a former president. Both considered serious violations of his military and obligatory oath as a ranking military officer. In some respects, bordering on, if not already there, treason.

His time thus far on the stand has consisted primarily of incessant whining. He told the House Armed Services Committee, “I’m concerned that [sic] there’s mischaracterizations of me becoming very politicized as an individual and that it’s my willingness to become politicized, which is not true. I am trying to stay apolitical, and I believe I am.”

As a reference to last summer when Milley and his troops violently descended on protesters in D.C.s Lafayette Square, he said, “I have done my best to remain personally apolitical and to try to keep the military out of actual domestic politics, and I made a point of that from the time I became the Chairman and especially beginning last summer.”

Milley missed the target by not admitting that it was he who chose this method and not Donald Trump who was sitting in the White House at the time taking care of other more important matters. It’s why he has generals to handle those types of things.

It was Florida Republican Matt Gaetz who showed Milley the least amount of mercy. “You’re far more interested in what your perception is and how people think about you in insider Washington books than you care about winning, which this group seems incapable of doing,” he blasted at Milley. This was said in front of Gaetz’s colleagues, head of US Central Command, Gen. Frank McKenzie, and Defense Secretary Lloyd Austin.

In a recent book co-authored by Washington Post reporter Robert Costa and famed Watergate journalist Bob Woodward, Milley’s phone conversations with a Chinese general were given the once over. It was determined that the intended purpose of the calls was to relieve the Chinese general’s mind and to undermine Trump’s strategy of keeping the commies in suspense.

The new revelations have lawmakers on both sides already calling for Milley’s resignation and they haven’t even gotten to the good stuff yet. Once Milley quits trying to save his unsavable reputation, he’ll finally get around to answering the questions concerning why he’s in the hot seat, to begin with.

It has to do with Afghanistan, soon to be Mr. Milley. It has to do with the 13 Marines, and the innocent Afghans falling off the wings of ascending aircraft, and a car being blown up because of bad intelligence, and, and, and…

Some lawmakers are already calling it treason even at this early stage. What do you call it?