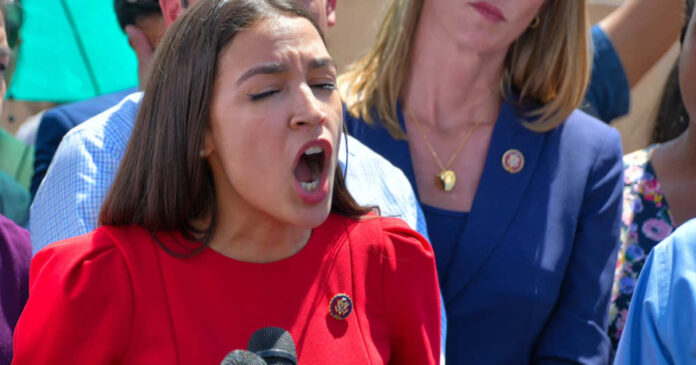 The drama queen herself is back in the public’s eye, trying to make it seem like she is fighting for the people. Alexandra Ocasio-Cortez once had a Green New Deal that had a price tag of trillions of dollars. And now she is trying to make it appear that she disagrees with the massive price tag of $3.5 trillion by telling people it is more about content than dollar signs.

Ocasio-Cortez is a big fake. She says that the price tag is too much but, in the end, she supports the bill no matter what the price tag comes out to be. She loves the bill’s content because it is a version of her Green New Deal, just with Biden’s name on it. She found a way to get what she wanted without facing all the opposition to get it passed.

She hates that people keep talking about the price tag, and she desires to pass the bill no matter what the cost may come out to be. She believes that money grows on trees, and she can go out and pick a few $20 bills and be just fine. But the reality is that there is more to economics than she realizes.

During a CBS interview, she made her feelings known. When Margaret Brennan started asking questions, the AOC started to squirm. Brennan was trying to draw out what AOC felt about Joe Manchin and his $1.5 trillion limits and how others in the party were claiming that his cap was too small.

Brennan got personal with Ocasio-Cortez and asked, “That’s the number that Senate moderates, Joe Manchin in particular, want to get down to. President Biden, according to our reporting from Ed O’Keefe, our correspondent, says you’re going to have to settle for about $2 trillion. Is that an acceptable ceiling for you?”

The AOC is not the final vote. She helped Biden develop the trojan bill behind the scenes and crammed all of her wishes and desires into it, so it was an inflated mess. The Democratic Party is running on bloated wishes and hoping that all of its members fall in line. But the moderates are kicking and screaming that they cannot support the bill in its current state.

The districts they represent cannot afford to have a happy person take all of their hard-earned money by taxing them to death. They need Manchin to fight for them.

The AOC fired back what she thought. She said, “So here’s where I think the problem is. It’s that when we talk about top line numbers, there’s a lot that is hidden in that discussion. And so the reason why this conversation shouldn’t be about numbers, but it should be about what substantive programs are willing to be excluded or that–”

The ignorant AOC clearly does not understand the basic concepts of math. No one can spend more than what is available. And the federal government cannot see tax money as a source of income to spend as they see fit. Taxes are collected to help defend the country, and it is not a payday for Democrats to fund their social programs.

The Green New Deal is now known as the “Biden Build Back Better” program. He thinks that he can build things better than any person that has come before him. But so far, all he has done is destroyed jobs and taken people for a financial ride. He could care less about the people, and all he cares about is getting done what his masters need him to do before they cast him to the side and install someone else in the White House.

Ocasio-Cortez has rightly identified a new party emerging on the political landscape. Progressives are a growing force. They have not publicly declared their arrival because they still need the umbrella of protection from the Democrats. But once they are large enough to stand on their own, they will split off from the liberals.

Ocasio-Cortez snorted that “The budget bill that House progressives are trying to fight for, the Biden Build Back Better agenda, includes universal pre-K, free community college, expansion of Medicare; we’re fighting for expansion of Medicaid. And these are the things that we are saying, in addition to the very real climate threat that we have, emissions reductions, are worth standing up for.”

What she is fighting for are not rights that Americans should expect. To force universal health and childcare is to rob people of their right to free enterprise and the right to choose what is best for themselves.