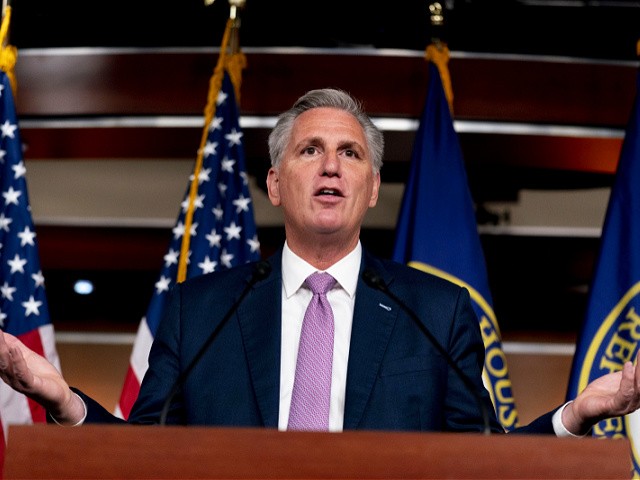 “President Biden’s delusions have suggested for months his economic plan is ‘working.’ Anyone that saw today’s jobs report, or spends any time in the real world, knows it is failing,” McCarthy said in a statement.

President Joe Biden talks to Speaker of the House Nancy Pelosi (D-CA) as they leave a House Democratic caucus meeting at the U.S. Capitol on October 01, 2021, in Washington, DC. Biden called the meeting in order to push through an impasse with his $3.5 trillion infrastructure plan. (Photo by Kevin Dietsch/Getty Images)

“The misguided policies of Joe Biden and congressional Democrats have turned what should have been an economic resurgence coming out of the pandemic into an economic crisis,” McCarthy’s continued, noting that Americans have to pay more now for everyday goods.

“Small businesses continue to struggle because of the government-created labor shortage. And 80 percent of Americans are facing reduced income from proposed tax increases,” the minority leader explained. “Republicans know how to get America working because just two years ago, our country was thriving.”

“Democrats see today’s economic weakness as their opportunity to permanently change the country to help their political allies while eliminating opportunity for everyone else,” McCarthy persisted. “This is socialism, and Republicans will do everything in our power to stop it. Our country’s future depends on it.”

The Labor Department jobs report released on Friday showed a terrible report for Biden. The report showed the U.S. economy only added 194,000 jobs in September, depicting the sharp turn of the economy’s growth. The unemployment rate only fell by 0.4 percent (4.8 percent total) as well.

“The sluggish pace of jobs created surprised experts again, as they predicted about 500,000 jobs created, but the economy fell short again,” Breitbart News’s Charlie Spiering noted. “The jobs numbers were expected to rise significantly in September, as expanded unemployment checks from the federal government expired.”

According to the Labor Department, the labor force participation slightly went down as well, from 61.8 percent in August to 61.7 percent in September.