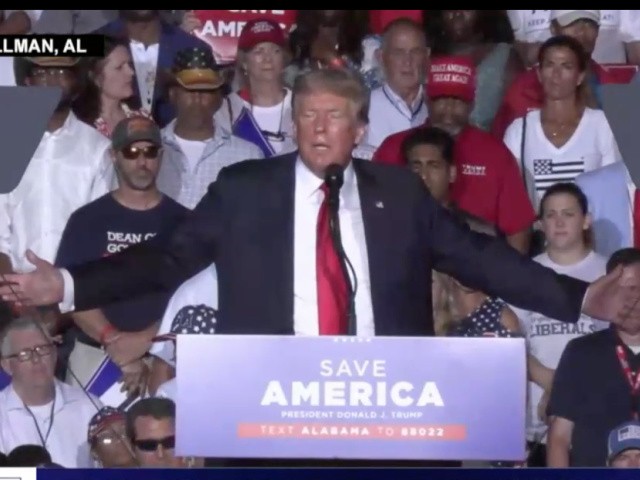 “When Milley told me that, I said, ‘What are you a nut job? Are you stupid?’ That was one of the many times I realized he was stupid,” Trump said of the general.

“I said, ‘Now wait a minute,’ especially being in the construction business – “You mean we have a 50 million dollar plane, all it needs is a tank of gas and a pilot,” Trump stated. “We could have flown over 200 pilots, taken everything out, but we didn’t have to worry because the Taliban listened to me.”

Trump laid the responsibility of the abandoned military equipment at the feet of Milley, suggesting the general gave Biden the same advice that Milley gave him.

The 45th President then honed in on the Baghram Air Base:

And with Baghram – you know it’s right next to China. Nice to have a base like that. It’s got the longest runway there is. The concrete pad is so thick. Being in construction, I figured maybe like six inches. How about like six feet. Six feet thick, and we left it. They spent, supposedly ten billion dollars building it. We left it in one night, and we left all of the equipment.

“That equipment is brand new right out of the box, including the night goggles, which are better than the goggles we have,” Trump explained. “They’re later models. And including all of the rifles, machine guns, and guns – they’re the latest model. The latest and the greatest.”

“So, our enemy of many years has all of that, and it’s a shame. It’s a shame. To see what happened to our country, it’s a shame,” the 45th president stated.

“You’ll have a five million dollar army tank, a three million dollar helicopter brand new,” Trump added. “Think of this: Even if you just flew it into Pakistan, it’s a very short flight, and then you took your time taking it … we should’ve taken everything.”

“Most importantly, we should have never lost 13 warriors,” the 45th president said.