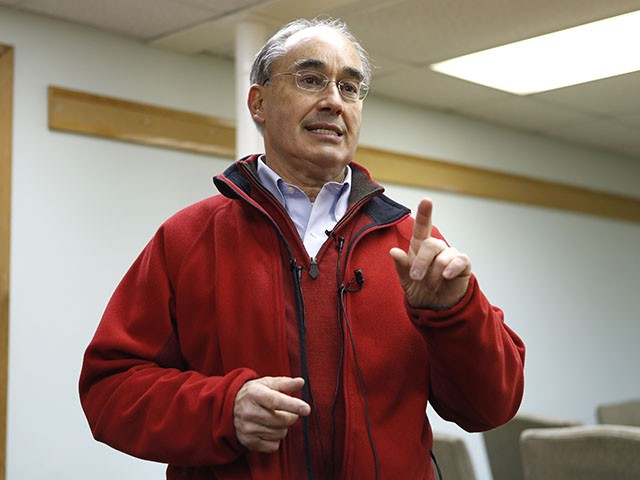 Poliquin, after representing the Second District for four years before being unseated by Golden, wants a rematch against the current congressman after he voted to impeach former President Donald Trump twice — even though his district voted for Trump in both presidential elections — and has voted with House Speaker Nancy Pelosi (D-CA) 84 percent of the time, helping to enact radical policies from the Biden-Pelosi agenda.

The former congressman said that he’s going to be able to unseat Golden for a few reasons: “The people of Maine don’t understand why it makes sense to spend four, five, six trillion dollars of additional money. It’s all borrowed, or printed, which is worse. Inflation is now taking off, and now we’re approaching winter. We have 75 percent of our homes depend on heating oil, but this winter, Matt, they’re paying another 35 percent for heating oil. Gasoline and diesel is up 50 percent. Our rent and groceries up about 20 percent. So all of this trillions and trillions of dollars of additional spending is driving up inflation.”

“Mr. Golden has never run a business before. I spent 40 years running small businesses before I served as state treasurer, and then in Congress,” Poliquin said, explaining why he is the better choice to represent the district. “The people of the Second District want someone that reflects their values, fiscal discipline, a strong border with Mexico to keep fentanyl out our state. Unless we change course down there, these problems are going to get worse for the people of Maine, so I think they’re going to come out in droves, and I think we’re gonna win this thing again.”

Poliquin spoke about what a Republican House majority would do in Congress versus a Democrat majority, saying the GOP would first stop the “trillions and trillions of dollars of unnecessary spending that’s driving up inflation. That’s the first thing that we would do is, is just not approve this sort of out of control spending.”

He said, second, the Republicans would not “jack up taxes.” He added, “The state of Maine has the fifth largest, highest rather, tax burden in the country. That’s because we have high state taxes, and we have lower wages. So the tax burden to pay off our taxes are the fifth highest in the country. And in these spending programs that Pelosi and Golden and Schumer and all these people, you know, want in Washington, it drives up taxes further. So we would stop the spending that’s unnecessary. We would not raise taxes — we keep taxes low — and we would certainly not pay people to stay at home.”

Poliquin said it was not surprising for him to see the disastrous jobs report for September under President Biden’s watch. Breitbart News reported on Friday that data from the Labor Department revealed, “The U.S. economy added 194,000 jobs in September, and the unemployment rate fell by 0.4 percent to 4.8 percent.” These numbers were less than half of the 500,000 predicted jobs that would be created in the mouth.

The Maine Republican blamed the radical agenda from the Democrats’ policies, saying, “Now we’re paying people 300 bucks a month to have kids if they’re younger than six, and there are no work requirements. Remember, what this far-left agenda has done is stripped out work requirements from all of these entitlement programs, and now this $3.5 trillion package they’re working on, which further expands the entitlement, that Golden, you know, voted to go down this reconciliation path to start spending this money. There are no work requirements in here.”

Poliquin said when he’s back in Congress, and the Republicans are in control of the House, they will make sure to “take care of people who really need help and maybe have disabilities or have elderly parents at home. I get all that, but my goodness gracious, don’t make it easier for them to stay home and not work than go back to their job. It’s just not fair, and it’s not right.”