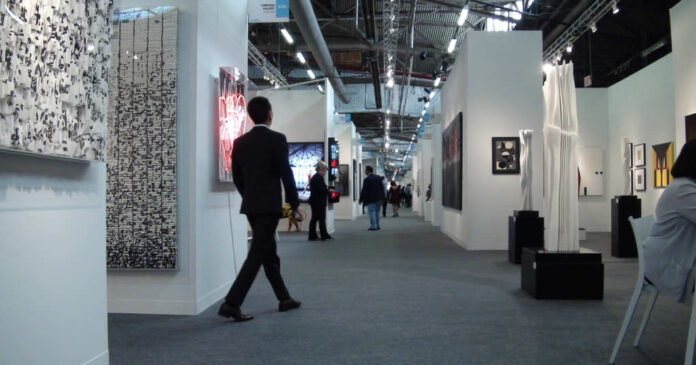 Hunter Biden came out of hiding and entertained some celebrities on Friday at his first art exhibition in Hollywood, California. This came right on the heels of some ethics concerns that remain about buyers potentially paying enormous prices for the art pieces done by the son of President Joe Biden. Some see this as a way to gain influence with the powerful in the White House.

The exhibition was hosted by Hunter Biden’s New York art dealer, Georges Berges. It featured a star-studded crowd of about 200 people including boxing legend Sugar Ray Leonard. There were other famous guests and potential art buyers at the exhibition at Milk Studios including singer Moby, Mayor Eric Garcetti, and artist Shepard Fairey. Fairey is the creator of the Barack Obama “Hope” campaign poster.

The president’s son has been the focus of a number of scandals, and now he has taken up the life of a full-time artist. His paintings will be shown again later in the month at Berges’ gallery in Soho, Manhattan.

Hunter’s paintings and collages often look like bacteria under a microscope, and they often depict human body parts. The artwork was initially set to sell for $75,000 for works on paper and $500,000 for large paintings, but that number has gone much higher in recent days.

Hunter’s wife, Melissa, joined him at the Los Angeles show along with two of his daughters, Naomi Biden, 27, and Maisy Biden, 20, according to the Daily Mail.

The top Republican on the House Oversight Committee demanded that the gallery owner promoting Biden’s art detail what ethics measures he was taking to keep buyers from gaining illicit influence with the White House.

Rep. James Comer (R-KY) wrote in a letter to Berges that the investigation would focus on his gallery’s role in preventing obvious opportunities for an ethical or national security breach.

White House Press Secretary Jen Psaki said in July of potential purchasers of Biden’s art that they don’t know who they are so there could be no scenario where they could provide influence.

Hunter Biden, 51, has not had any formal art training, but he has reportedly been creating art since he was very young.

“I don’t paint from emotion or feeling, which I think are both very ephemeral,” Biden said in a June interview with artnet.com. “For me, painting is much more about kind of trying to bring forth what is, I think, the universal truth.”

The younger Biden used to practice law, spent much time lobbying in politics, and struggled with drug addiction. He has been followed by some high-profile political and personal scandals.

In emails that were leaked in 2014 and reported by the New York Post, Biden seems to attempt to leverage his influence with his father who was then vice president. Biden’s father was at that point heavily involved with the U.S. policy on Ukraine. Hunter Biden referenced his father in negotiations regarding his very lucrative position on the board of the Ukrainian natural gas company called Burisma.

Hunter Biden was the focus of some new controversy this week when the White House declined to say Monday whether he still held a 10 percent stake in a Chinese private equity firm that’s controlled by the state-run Bank of China.

“He’s been working to wind that down,” Psaki said.

During a Tuesday appearance on “Fox & Friends First,” Comer accused the White House of covering for the president’s son.

“The fact that Jen Psaki couldn’t say, ‘Yes, Hunter Biden divested his stake in that Chinese holding’ tells me that he probably still owns it,” Comer said.

When the younger Biden was asked back in June what his father thinks of his art, Hunter said that his dad loves everything that he does and he would leave it at that.