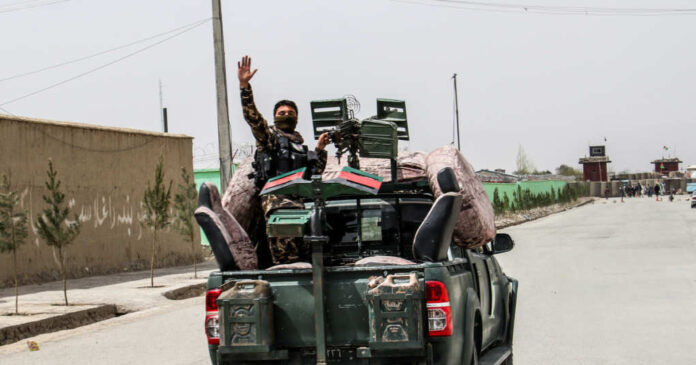 Joe Biden’s dramatic pullout of Afghanistan was a complete disaster. His abandonment of the United States citizens and betrayal of the Afghan people marks him out as a coconspirator for terrorism. His hasty retreat opened the door for the Taliban to walk right back in and take over. And now that he has bowed to their wishes, he wants them to help America fight ISIS.

The quick and easy answer to Biden’s request is flat-out denial. The Taliban may act like they hate terrorism, but deep down, they support it. They have allowed ISIS to enter into their country and set up their bases once again.

The soft side of Joe Biden has also come out as he has agreed to provide aid to the suffering because of this nasty betrayal. The Associated Press gave a report that showed “The U.S. has agreed to provide humanitarian aid to a desperately poor Afghanistan on the brink of an economic disaster while refusing to give political recognition to the country’s new Taliban rulers.”

Biden never thinks through his actions before he takes the first step. Experts warned the old man not to do anything hasty with the troops, but he thought he knew better. He gave the order to run, and the country was put into a position where oppressive rulers could take over and make life miserable for everyone trapped on the inside.

The president felt the need to return to the negotiation table to speak with the Taliban rulers. His actions make no sense at all. He returns to the table, trying to seek their aid in fighting a group that the Taliban are protecting. And Biden sits there and refuses to acknowledge the leadership of the Taliban, and he has given them no reason to trust him.

The Associated Press went on to report that “The statement came at the end of the first direct talks between the former foes since the chaotic withdrawal of U.S. troops at the end of August.”

Biden’s Administration has a lot of nerve, even making an effort to act as they care. Ned Price is the State Department Spokesman, and he came out stating that they are trying to work out a safe passage for those left behind. That should have been something to consider before ditching them and leaving them in the hands of the enemy.

The Taliban has no respect for life. They are actively seeking out Americans so that they can put them to death. They have put women back into a slave-like status. And they have let terrorist cells return to the landscape. Innocent people are being tortured and executed because Biden turned his back on them.

Price also mentioned that “The two sides also discussed the United States’ provision of robust humanitarian assistance, directly to the Afghan people. The discussions were candid and professional with the U.S. delegation reiterating that the Taliban will be judged on its actions, not only its words.”

The Taliban no longer feared the United States because Biden surrendered to them. He goes into the negotiations acting like a big shot. But he is the one that technically lost because he ran when things got rough on the ground.

And they indeed have already told the president that they will never help him fight ISIS again. Previous administrations had already beaten ISIS back into the shadows from where they have come from, and they were no longer a threat. But after decades of work and effort, Biden singlehandedly allows them to return to power. ISIS was behind the attack that killed 13 American soldiers.

The Taliban released all the terrorists detained by United States forces once they took control. Biden is blind to what they represent if he buys into anything they tell him.