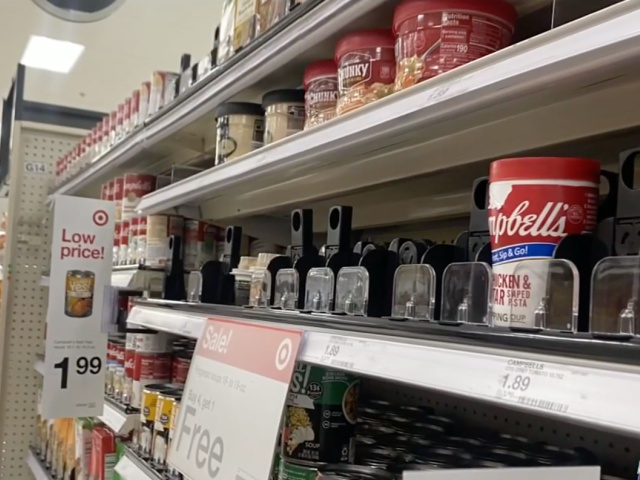 “In Target, fruit snacks were limited, protein bars were nearly gone too, and Lunchables were low in stock,” the outlet said. “We saw the least amount of available frozen foods at Publix and snack foods like beef jerky were running low.”

“Both stores had limits on pet foods,” WJXT added.

CEO of the Michigan Pork Producers Association Mary Kelpinski told the Detroit Free Press the supply chain crisis is hurting suppliers’ ability to keep food on the shelves. “Nationally, our numbers are down,” Kelpinski said. “Demand is very good. Everyone wants bacon, but we have fewer pigs.”

The challenge of keeping food on the shelves for consumers comes as the supply chain is suffering from a deficit of labor primarily due to the federal government and Democrat-controlled state governments’ dispensing large unemployment benefits that outweigh private sector wages.

Competitive pay, helping provide our Crew members a wage and benefits package that we believe is one of the best in the retail grocery business, is the most meaningful investment we can make,” Isely said. “When we can retain people who are aligned with our values and provide growth-oriented career opportunities, we are investing in our community as well.

Natural Grocers also said the wage increases have been in place since the beginning of the Chinese coronavirus in March of 2020. “The initiative included a permanent $1 hourly wage increase for store associates, and the company said the incremental cost of the extra pay topped $18 million as of Sept. 30.”

As a result of Democrat policies that pay workers more money than the labor market can afford without raising prices, a Moody’s economist told the New York Post the price increases are impacting the average American family by about $175 dollars a month.

“For households earning the US median annual income of about $70,000, the current inflation rate has forced them to spend another $175 a month on food, fuel and housing,” the Post reported.

Meanwhile, the Labor Department estimated American workers and families are paying 5.4 percent higher prices than just last year before President Joe Biden spent nearly $5 trillion dollars in coronavirus stimulus. The department also marked the price for food at home as more than doubling in September from the 0.4 percent in August.

Beef products are not the only proteins experiencing price increases. Pork products have also become more expensive, increasing 12 percent in one year. Bacon, for example, is 20 percent more expensive than in 2020.