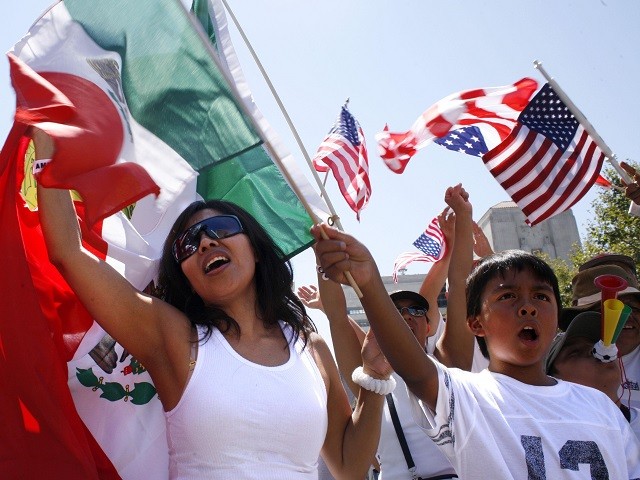 Democrats and their allied pro-amnesty lobbyists are pushing their so-called “Plan C” following the decision by the Senate’s debate referee to exclude two mass-amnesty proposals from the pending budget plan. The plans were rejected because they were a “tremendous and enduring policy change that dwarfs [the] budgetary impact,” the parliamentarian concluded.

Bloomberg reported details of the Plan C plan on October 14:

Democrats’ proposal would expand the Department of Homeland Security’s use of parole to include millions of undocumented immigrants, allowing them to apply for five-year work permits and subsequent renewals, sources familiar said. Immigrants with those permits generally would not be deportable.

Current federal law allows the homeland security agency to let individuals in emergencies enter the United States. For example, a sick Russian fisherman could get parole so he could be helicoptered into an Alaska hospital. But Congress should widen this parole doorway to legalize roughly seven million economic illegal migrants, say the advocates.

“A lot of it depends on the details of what the parole language would look like, but we are committed to delivering for people this year,” Lorella Praeli, co-president for the advocacy group Community Change, said during a press call this week.

Praeli and other advocates have called on Democrats to disregard the parliamentarian’s ruling if she rejects the latest proposal. That would mean the provision could be subject to an objection on the Senate floor and be removed from the massive social spending package, but members would be required to vote on it to do so.

“Parole is not a pathway to citizenship, which immigration advocates have long championed,” said a pro-parole report by the Center for American Progress (CAP):

Nonetheless, as this column explains, parole has a long and bipartisan history, and it potentially satisfies the parliamentarian’s biggest concerns. If a parole provision were written to include anyone who entered the United States before January 1, 2011, it would benefit up to 7.1 million undocumented immigrants across the country.

But the huge population of legalized workers would be a huge subsidy to the wealthy coastal states because it would minimize marketplace pressure on coastal-based investors to create jobs in the distant heartland states, according to data showcased by the CAP group.

The plan would legalize 4.8 million adults in seven big coastal states, plus 344,000 in Democrat-run Illinois.

But the so-called Plan C would legalize just 412,000 cheap workers in 10 midwestern states. The plan would legalize only 23,000 workers in six small states on the periphery — Maine, Alaska, New Hampshire. Vermont, Wyoming, and North Dakota.

The additional workers would bump up employment, spending, and real-estate values in the coastal and Democrat-run states, so pushing GOP-run states even further behind in their losing race for investment, real-estate wealth, and representation in Congress.

For example, since at least 1990, Sen. Joe Manchin’s West Virginia and Sen. Mitch McConnell’s Kentucky have lost investments, jobs, wealth, people, and political representation in Congress as waves of legal immigrants and illegal migrants crowded into the coastal states of California, New York, Texas, and Florida.

The economic skew show by CAP matches the skew in Plan A, according to data presented by Mark Zuckerberg’s FWD.us advocacy group of West Coast investors.

The extra legalized workers and consumers would be good for coastal investors and employers.

But they would also harm American wage-earners living in both the coastal and heartland states.

During the same period, the Dow Jones index grew 100 times faster because of higher corporate profits.

Amnesty advocates know their dramatically expanded class of non-citizen subservient workers would be a constitutional sore point, said Krikorian. If the plan is implemented, he predicted:

They will say “You’re right – that’s why we need to get a green cards.” So that’s what their game is here — [they want to] create a situation that the American people would rightly be uncomfortable with, and then will offer them the solution of upgrading the [work migrants] to a full amnesty so they can be on a citizenship track.

Amnesty advocates say they have an incremental strategy.

“This is a solution that gets us closer to our North Star of citizenship for 11 million,” Kerri Talbot, the deputy director of the Immigration Hub, a pro-immigration group, told the New York Times for an October 13 article. The article continued:

“My guiding principle throughout the ongoing reconciliation process has been providing a pathway to citizenship for the largest swath of the undocumented community,” said Senator Robert Menendez, Democrat of New Jersey, who has worked on the issue … “In spite of the parliamentarian’s recent negative opinions, I will continue to work with my colleagues and a broad coalition of groups, including advocates, to find a path forward.”

“It would get us one step closer, frankly, to the ultimate goal of providing a formal path to legalization,” Jorge Loweree, at the pro-migration American Immigration Council, told Bloomberg.

The Democrats’ Plan C includes nothing to seal up the U.S. border against further illegal migration. “It’s obvious we have an open border,” said Sen. Shelley Moore Capito (R-WV), the senior Republican on the homeland defense appropriations committee, “I’ve talked to [DHS chief Alejandro] Mayorkas … [and] the administration, they didn’t have a plan,” she said during an October 6 press event.

For many years, a wide variety of pollsters have shown deep and broad opposition to labor migration and the inflow of temporary contract workers into jobs sought by young U.S. graduates. This pocketbook opposition is multiracial, cross-sex, non-racist, class-based, bipartisan, rational, persistent, and recognizes the solidarity that Americans owe to each other.

It also pushes Americans towards addiction and homelessness, and minimizes the incentive for employers to help them recover: