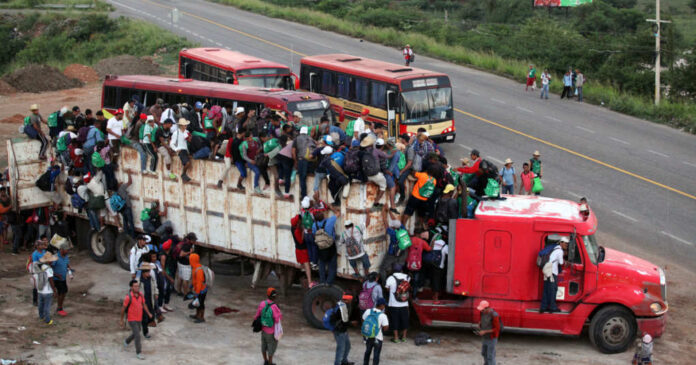 The entire southern border is a massive mess that Joe Biden deliberately set up to cover his failed policies and actions. His plan to overrun the southern border has led to the lives of millions of Americans being affected negatively. Residents living near the border fear for their lives because of the sheer number of illegals threatening them as they pass by their homes.

Texas has the most significant section of the border that needs protecting. Governor Greg Abbott has tasked his officers with keeping the country safe. He has led the way in getting others to join his fight against the abuse by the Biden Administration.

But now that Texas is securing things, the illegals are looking for other ways to enter illegally. Many of them have shifted to the west to gain access. The state of Arizona is now feeling the pain that Texas has come through and is now working to control.

Arizona has been left out of the news because the media wants people to think that the border is secure. But the truth is that every inch of the border is being overrun. Doug Ducey is the governor that is concerned about the lack of attention and is making preparations to fight back just like Greg Abbott is doing.

Ducey has stated that the border crossings have gone up over 1,000 percent in the past year. The state sees drug dealers, children, families, and every other type of criminal making their way into the heartland.

Ducey pointed out that “What’s already happening in Yuma is reflective of what’s happening on the Texas border. Arizona is a border state. We faced this before, but we’ve never faced a crisis this large in 21 years.”

The Washington Examiner has reported that since January, the region of Yuma has seen over 96,000 illegals move over the border. That number is more significant than every legal resident that lives in the city. The Examiner is reporting that over 1,000 illegals move through the town every single day. Biden plans to bring as many illegals as possible into the country for an undisclosed purpose.

Joe Biden is the sole force responsible for the mess at the southern border, and he alone has given the signal to the illegals to start their journey north before the door closes in 2022. Hundreds of thousands of people are heading toward the country, hoping to make it before the border goes back to being secured.

Ducey blasted the old man by saying, “Governors are not going to sit around while President Biden refuses to act. We’ve tried to meet with the president and be part of the solution, but he refuses. No, worse — he ignores governors, just like he’s ignoring the border and the safety of the American people.”

Ducey noted that Biden is claiming that there is nothing that can be done to secure the border. But that thought is a lie since Donald Trump had secured the border while he was in office. The truth is that Biden does not want to shut it all down.

Ducey is demanding that Biden step up and do his job. But all of the southern governor’s requests are falling on deaf ears. Governor Abbott is the most outspoken southern leader fighting against Biden’s lousy policies.

Abbott sent a letter to Biden stating, “I request that you reconsider your denial of an emergency declaration for the State of Texas as a result of the ongoing border crisis, which reached such magnitude and duration that, on May 31, 2021, I formally recognized the disaster, and which continues to escalate as evidenced by the dire situation in Val Verde County.”

Ever since the president denied Abbott’s request, the southern governors have aligned themselves to fight back. It is just a matter of time before the states take control and protect Americans from Biden’s invasion force.