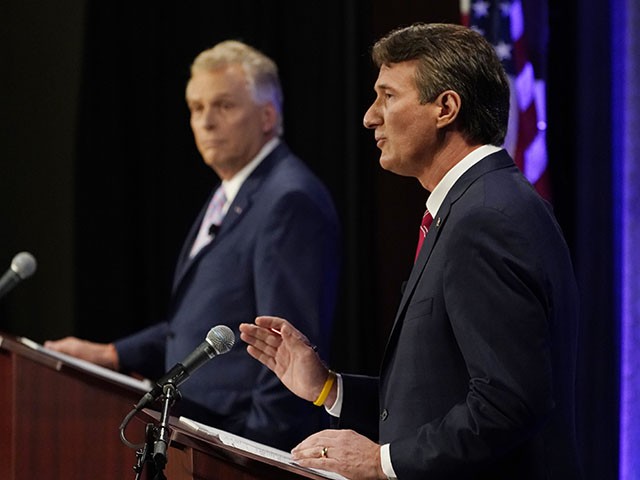 The remaining respondents are split, 1.3 percent in favor of a third party or write-in candidate and 2.8 percent undecided. The third party candidate on the ballot, Princess Blanding, identifies as a Liberation Party member and will primarily serve as an alternative for Democrat-aligned voters. The poll’s margin of error is three percent.

Of the last three Trafalgar polls, this most recent one marks the first time Youngkin has led McAuliffe in the blue-leaning state. The last poll, taken at the end of August, showed McAuliffe with a slight edge over Youngkin, 46.6 percent to 46.3 percent. The one before that, taken in early July, had McAuliffe up by close to two points, 46.8 percent to Youngkin’s 45 percent.

McAuliffe said this month in candid remarks during a virtual rally with state Democrats that President Joe Biden, whose approval rating is hovering at record-low levels, is causing his campaign “headwinds.”

“But we’ve got to get Democrats out to vote,” McAuliffe said, per a clip of the event. “We are facing a lot of headwinds from Washington, as you know. The president is unpopular today unfortunately here in Virginia so we have got to plow through”:

The Virginia Democrat’s remarks align with Biden’s stunningly low approval rating in the Trafalgar poll. The poll shows 58.4 percent of respondents disapprove of how Biden is handling his job compared to 39.9 percent who approve of the president’s job handling.

McAuliffe has also recently taken heat for his positions on education policy, a development that comes largely as a result of the the former governor saying during the last debate that he does not believe “parents should be telling schools what they should teach.”

As far as party participation in the poll, 45.8 percent of respondents were Democrat, 37.8 percent were Republican, and 16.5 percent were nonpartisan or other.

Early voting for the election is taking place September 17-October 30, and Election Day is November 2.