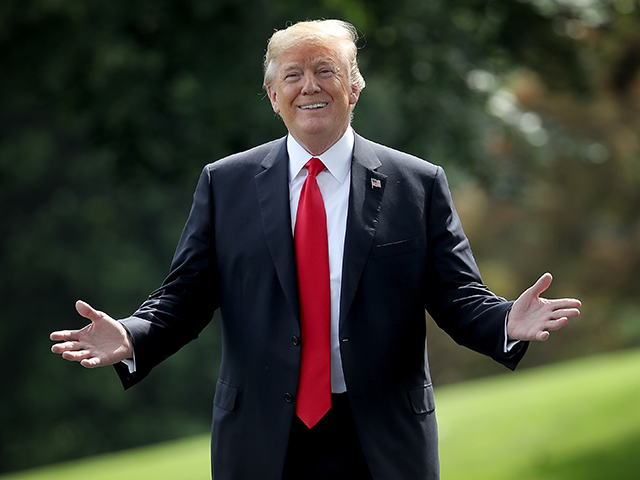 “While I have never painted before, Hunter has inspired me to immediately begin painting because I’ve always felt I have a talent at that, and could surely get at least $2 million dollars per canvas–and probably a lot more. I will begin immediately. Our Country is crooked as hell!” the 45th president said.

The president’s son reportedly sold at least five pieces of art to anonymous buyers on October 1 for $75,000 each at his Los Angeles exhibit. Hunter’s newfound cash cow has furthered concerns of potential for Biden family corruption, as the problem of money laundering in the art world remains a large problem.

“We still do not know and will not know who purchases any paintings and the president remains proud of his son,” White House press secretary Jen Psaki said, despite White House ethics experts’ concern about the arrangement between Hunter Biden and his gallerist to keep buyers anonymous.

Ashley Biden (L), Hunter Biden (2nd L) and Jill Biden (R) hug US President Joe Biden after being sworn in during his inauguration as the 46th President of the United States, on the West Front of the US Capitol in Washington, DC on January 20, 2021. (JONATHAN ERNST/POOL/AFP via Getty Images)

Trump also criticized the Justice Department’s reinstatement of former FBI Deputy Director Andrew McCabe last week. Former Attorney General Jeff Sessions fired McCabe in 2018 for allegedly lying to investigators about releasing unauthorized information to the Wall Street Journal regarding Hillary Clinton’s use of a private email servers. The firing occurred just one day prior to McCabe’s retirement, a firing his lawyers argued was politically motivated due to his role in the Russian collusion investigation, Breitbart News reported.

“Isn’t it terrible that all of Andrew McCabe’s benefits, pensions, salary, etc., were just fully reinstated by the Justice Department? This is yet another mockery to our Country,” Trump said. “Among other things, McCabe’s wife received hundreds of thousands of dollars in campaign contributions from Hillary Clinton and the Democrats while Crooked Hillary was under investigation, which was quickly dropped, of course.”

Trump called recent events a “bad chapter” for the “once storied FBI” and said the institution’s decline is sad because “so many GREAT people work there.”

“Next thing you know the two lovers, Peter Strzok and Lisa Page, will be getting awards for what they did, and Hunter Biden will be given a clean bill of health on everything done by him, with everyone to receive as payment a beautiful Hunter Biden inspired painting selling at your local art gallery for $500,000,” he said.