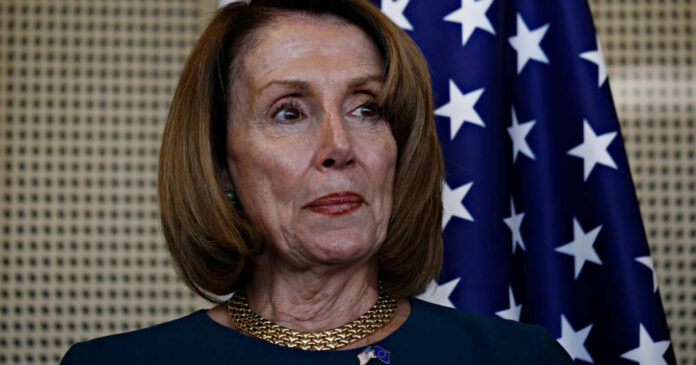 The ‘Build Back Better’ plan President Biden and most Democrats have in mind for Americans is so convoluted even House Speaker Nancy Pelosi (D-CA) can’t find the words to explain such an insane plan to the people. During this week’s press conference she was asked very point-blank about this problem, and her response was a joke.

A reporter asked, “Do you think you need to do a better job at messaging and going forward, how do you sell this?” A rather simple concept, and one she should be able to comply with; without any difficulty at all right? Nope. In the typical Democrat fashion, it wasn’t her problem.

“Well, I think you all could do a better job of selling it, to be very frank with you… Every time I come here, I go through the list … It is hard to break through when you have such a comprehensive package. Whether [Americans] know it or not, they overwhelmingly support it.”

If it’s hard to break through the plan for people to understand, maybe it’s too complex of a plan? People need to know what their reps are approving, or disapproving, and if the House Speaker cannot be bothered to explain what this ‘plan’ entails, then perhaps it’s a sign she herself doesn’t understand the full ramifications of it. This is a dangerous situation. Surprisingly certain Democrats aren’t following the rubber stamp mentality.

Senators Joe Manchin (D-WV) and Kyrsten Sinema (D-AZ) have been the two outliers to prevent this from going forward. These Democrats have the Republican value of ‘people over party’ that has been going from politics for ages. This mentality has in turn made them targets for attacks. From people boating up to Senator Manchin’s anchored yacht in DC or the bathroom at ASU with Senator Sinema, these radicals will stop at no ends to get their demands met; even if they don’t truly understand everything they are demanding.

Within these demands is amnesty for all illegal aliens already here, a fast pass for those currently at camps on the border, and even more, policies to weaken our national security.

This bill is packed with so much fluff if it were a sandwich it would be classified as a Dagwood special (ala the  ‘Dagwood &  Blondie’ cartoon). Hell if this was a Republican bill it would have been tossed in the shredder by AOC or someone else from their group as a Tik Tok. It is a useless bill for the American people, and it needs to go away.

Speaker Pelosi has proven that she is no longer competent for the job, and now she is proving her reading literacy is questionable as well too. How much longer can the American people allow such a waste of space to be running the House? She disrespected President Trump because he had the backbone to stand for what’s right.

She disrespects our Veterans, anyone who isn’t a Democrat, and refuses any discussion that isn’t kissing her ring. Her favorite puppet President Biden can’t even address the Navy college graduates properly and she keeps pushing him as if he’s the US Savior.

It’s time for her to go, and we can only hope Sleepy Joe goes with her. They can take this horrific bill with them. Maybe it can keep them warm on the way because it certainly isn’t going to fix the problems in America. It will only make things worse. Just like most other things from the Democratic party.