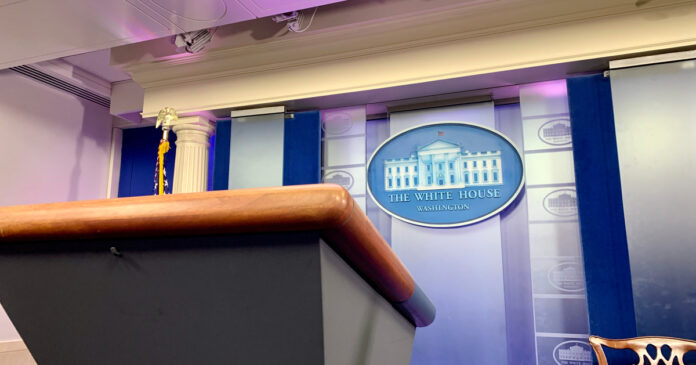 We all know how often the political left went after former President Donald Trump, claiming that he was breaking some law or another. They tried to say he cheated on his taxes. They said he colluded with Russia to win his first term in the White House. Hell, they even said he committed a violent sexual act before entering the political ring.

However, it seems that when it comes to those same laws, it’s not a sin or a crime for Democrats in power to break them. Apparently, it’s not even noticeable or mentionable by the media either.

The most recent example of mainstream media’s hypocrisy came to us on Thursday, as White House press secretary Jen Psaki gave yet another briefing to push Biden’s agenda forward.

Psaki was remarking on the heated gubernatorial race taking place in Virginia. Democrat Terry McAuliffe seems to be the contender favored by the White House. Now, making unbiased remarks or stating the facts about an ongoing political race is not against the law, not for anyone. However, it crosses the line when someone, as connected as Psaki, starts pushing her own opinions or even the views of the President onto the public.

And that’s certainly what Psaki did.

She said, “Again, we’re going to do everything we can to help former Governor McAuliffe, and we believe in the agenda he’s representing.”

As Washington Free Beacon reporter Matthew Foldi noted in a video posted to Twitter later that day, it was “Another day, another possible Hatch Act violation.”

I’d say advocating for McAuliffe from the White House’s pulpit counts as such an activity.

So does remarking that the President’s trip to California earlier in the year would “hopefully… be helpful to the efforts of the governor,” no doubt referring to the Golden State’s then-upcoming recall election that could have ended Democratic Governor Gavin Newsom’s career.  Who knows, it could have been this comment and Biden’s trip that convinced the last remaining undecided voters in California to put a check next to Newsom’s name and not his Republican contenders.

I mean, Psaki is obviously a federal executive branch employee. And this is now the second time she has not so subtly stated that she wants to help the political candidates’ campaign.

And I’m not the only one who thinks so.

According to the woman who held Psaki’s job before her, Trump’s White House press secretary Kayleigh McEnany it’s a definite violation. She asked on Twitter, “Why does the media not hold @PressSec accountable for potential Hatch Act violations?” McEnany then went on to state that this is now the second time Psaki has “advocated for political candidates from the podium.”

As McEnany makes clear, using your First Amendment right to an opinion is fine and even encouraged. Just not from the podium of the White House by a federal employee.

And the Democrats are very aware of this law, as they attempted to say that Trump violated it back in 2020 when he chose to give his acceptance speech for the official Republican nomination from the White House’s South Lawn.

According to a Los Angeles Times op-ed, this was considered malpractice by the administration. While the piece did admit that Trump himself, as President of the United States, nor his vice president, could be held liable for such violations, the rest of his staff could be. The op-ed claimed that by working to set up for and record Trump’s acceptance speech, involved White House staffers could be in violation of the Hatch Act.

Of course, the accusations never amounted to much, as flimsy as their case was.

The same cannot be said of the to be made against Psaki, however. But then again, it’s clear the liberal media has no intention of holding her accountable whatsoever.