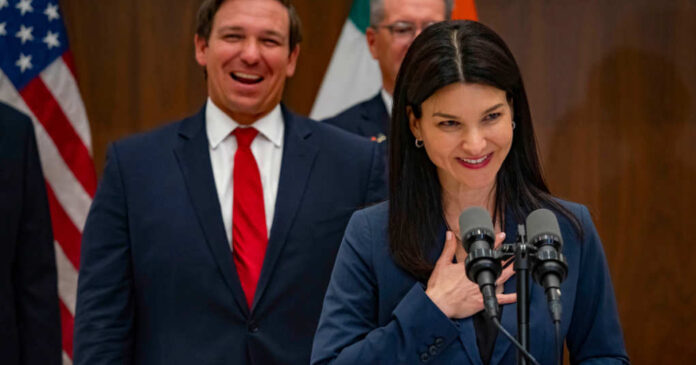 As you well know, Biden’s made promises to enact a vaccine mandate nationwide for all companies with over 100 employees. And while the mandate has not been fully enacted by the Occupational Safety and Health Administration or OSHA yet, as it isn’t an actual law, it is expected to be soon.

Naturally, this has caused much controversy throughout the country, with conservatives all over believing it to be yet another form of Democratic overreach.

Thankfully, a few big-name Republican leaders are vowing to stand up to the order when it is actually implemented. You know, names like Florida’s Governor Ron DeSantis and Texas’ Greg Abbott.

In fact, Abbott has already issued an executive order to ban any vaccine requirements in his state, both in the public and private sectors.

The order says, “No entity in Texas can compel receipt of a COVID-19 vaccine by any individual, including an employee or a consumer, who objects to such vaccination for any reason of personal conscious.”

In Florida, DeSantis has not done the same. However, he has promised that as soon as OSHA approves the Biden mandate, his state will be filing a lawsuit against it and the White House. According to Fox News, the 11th US Circuit of Appeals is already making preparations to file the suit.

Like most conservatives, both Abbott and DeSantis say that the mandate is a complete violation of our constitutional rights. Getting the vaccine should be a personal choice, and as such, no one should be losing their job just because they would rather not inject the unknown vaccine into their system.

DeSantis points out that for many of those affected by the mandate, they have been working with the public, often as those we labeled as “heroes” on the frontlines ever since the pandemic arrived on our shores. And yet, the only thanks we will give them is to fire them for not making a personal health decision in favor of the political left?

It doesn’t seem fair in the least, does it?

And DeSantis is the only one who thinks so.

As Republican Governor of Oklahoma, Kevin Stitt, has recently remarked the would-be mandate isn’t just “federal overreach, it’s unconstitutional.” And to prove it, he will be joining DeSantis in court against Biden “the second the rules are made public.”

However, like quite a few other Republican leaders, Stitt isn’t willing to take things quite as far as Abbott has. According to him, it’s not the government’s job to tell anyone how they should live their lives, and that goes for private companies too.

He said recently, “Just as I believe Joe Biden can’t tell businesses they have to mandate a vaccine, I don’t believe the government should tell a company they can’t. Businesses should have the freedom to make decisions based on their circumstances. When the government starts to pick winners and losers, we are headed down a slippery slope.”

He argues that if we are to allow people and companies to be truly free, we have to actually let them choose – one way or the other, no matter how we may or may not feel about their decision. We shouldn’t be making society into a caste system based on vaccinated status. But neither should we ban the vaccine or anyone who believes it may help them.

This isn’t about the vaccine itself or whether it works or not. Neither is it about the impracticality of companies being able to force the vaccine on their employees or else have them tested on a weekly basis, which will be very expensive and time-consuming.

Instead, it’s all about the principle of freedom, both for individuals and companies.

And that’s precisely why Republicans, no matter how far they want to take bans on the vaccine or mandates, should be willing to stand up to Biden and his administration. It’s clear Biden cares nothing for our freedoms. If he did, he wouldn’t have forced lockdowns or vaccines, to begin with.