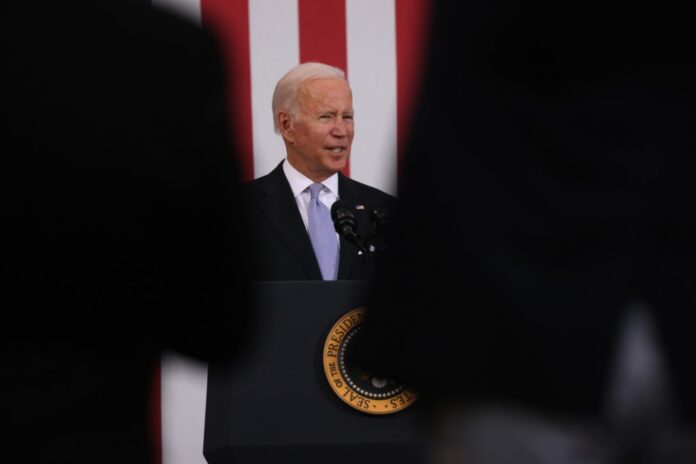 “What are we doing?” Biden asked after telling a story about parents driving their cars to McDonalds to get internet access during the coronavirus pandemic to do online schooling.

“This is the United States of America, dammit!” Biden shouted. “What are we doing?”

Biden spoke about a number of his priorities, admitting that it was a struggle to get his agenda passed through Congress, where Democrats control both houses.

During his speech, Biden acknowledged the pessimistic tone of his media coverage from the national media about his multitrillion-dollar agenda.

“They have understandably believed there is no possibility of my getting this done. This has been declared dead on arrival the moment I introduced it,” he said.

But Biden appeared confident he could get some bill passed, despite several weeks of stalled negotiations.

“Last four years you’d hear every month is, you know, infrastructure month,” Biden says. “Didn’t do a single damn thing. Nothing. I mean, nothing for four years.”

Biden faces ongoing frustration as he struggles to break the logjam in Congress, putting the future of his radical agenda in question. The president has already cut his $3.5 trillion funding proposals to $1.9 trillion in an effort to convince Senate moderates to support it.

Biden appeared nostalgic for the old days of bipartisanship in the Senate, recalling when he was friends with Republicans.

“I got on pretty well in the Senate for all those years. A lot of Republicans friends as well as Democratic friends. For real. … We used to travel a lot,” Biden recalled.

Biden also appeared nostalgic for the old days, appearing at an electric trolley museum to promote the future of America’s infrastructure.

“I remember riding the trolly,” he said, recalling his childhood before his family moved to Delaware. “I lived at the end of the line.”

Biden also boasted of his history riding Amtrak, promising massive investments into the rail system to get more cars off of the road and more passengers on trains.

“We will take, literally, millions of automobiles off the road,” he said.

He acknowledged that Scranton, Pennsylvania was “built on coal” but that it was time to shift to green energy like solar and wind.

“Coal built this town, but we gotta provide other avenues to make the same kind of living…” he said.

Biden repeatedly insisted that his multitrillion-dollar bills would not add to the federal deficit or add to the national debt.

“It does. not. increase. The debt.,” he emphasized slowly, despite widespread skepticism that both bills will be able to pay for his radical tax and spend agenda.

He admitted that he avoided even talking about the spending numbers.