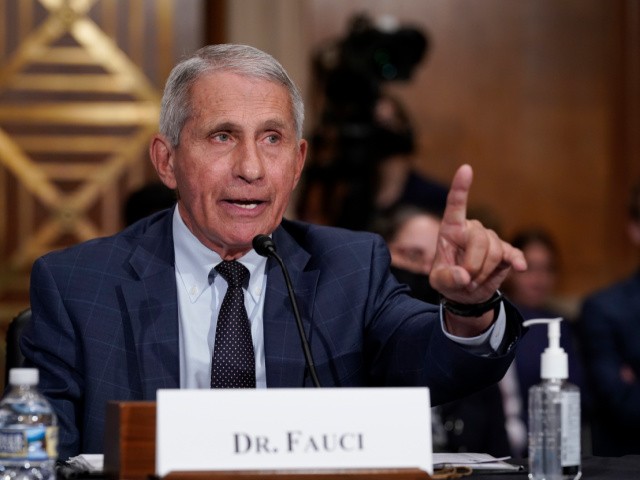 Fauci testified to Senators at a hearing in May that the NIH “has not ever and does not now fund gain-of-function research in the Wuhan Institute of Virology.”

However, the NIH’s October 20 letter to House Oversight Committee Ranking Member James Comer (R-KY) showed that the NIH grant, which was awarded to EcoHealth Alliance and then sub-awarded to the Wuhan lab, funded a research project during 2018 and 2019 that tested “if spike proteins from naturally occurring bat coronaviruses circulating in China were capable of binding to the human ACE2 receptor in a mouse model.”

According to the Department of Health and Human Services, “gain-of-function” research is research that improves the ability of a pathogen to cause disease.

Ebright tweeted that in the letter, the NIH “corrects untruthful assertions by NIH Director Collins and NIAID Director Fauci that NIH had not funded gain-of-function research in Wuhan.”

Furthermore, Ebright noted that the NIH’s letter appeared to show that EcoHealth Alliance violated the Terms and Conditions of the NIH grant.

The NIH said “out of an abundance of caution and as an additional layer of oversight, language was included in the terms and conditions of the grant award to EcoHealth that outlined criteria for a secondary review, such as a requirement that the grantee report immediately a one log increase in growth.”

These measures would prompt a secondary review to determine whether the research aims should be re-evaluated or new biosafety measures should be enacted.

EcoHealth failed to report this finding right away, as was required by the terms of the grant.

The letter pointed out that the coronaviruses studied under the grant were unlikely to have become SARS-CoV-2, now commonly referred to as the “coronavirus” or “COVID-19.”

Sen. Rand Paul (R-KY), whose questioning had led to Fauci’s denial that NIH was funding gain-of-function research at the Wuhan lab in May, tweeted: “‘I told you so’ doesn’t even begin to cover it here.”

Sen. Tom Cotton (R-AR), who was mocked for suggesting the coronavirus might have escaped from the Wuhan lab, also weighed in on NIH’s letter, tweeting, “Fauci knew. He should be investigated and prosecuted to the fullest extent of the law.”

Rep. Mark Meadows, former North Carolina congressman and former President Donald Trump’s chief of staff, tweeted: “To call this a bombshell is an understatement. Dr. Fauci and others claimed under oath the NIH didn’t fund gain of research function in the Wuhan Lab. Now the obvious is confirmed: they did.”

Dr. Fauci has yet to respond as of this writing.