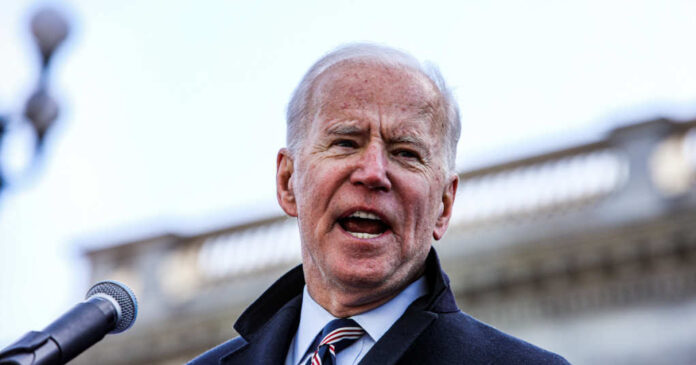 When Joe Biden opens his mouth, you really never know what’s going to come out. He is like a child. Someone has to stand behind him to prompt him to be nice.

Somehow, even nothing that has to do with politics will be sprinkled with his liberal views. He had one job on Saturday. He was supposed to honor the law enforcement officers who died throughout 2019 and 2020 while in the line of duty.

It’s been hard to be a law enforcement officer, though much of that has been as a result of liberals trying to defund the police. Somehow, they have a convoluted idea that if they get rid of the police, the crime will magically stop. It doesn’t…and Americans would prefer to have the police around.

“Being a cop today is one hell of a lot harder than it’s ever been,” Biden exclaimed at the U.S. Capitol. He saluted the brave men and women (if you can call that a salute).

Yeah, it is harder. Though, if there’s anyone who can do something about that, it’s Biden. He could, you know, rally the liberals to explain how law enforcement officers aren’t the enemy. We shouldn’t be bending over to kiss the arses of every criminal, yet that’s what’s happening in so many Dem-run cities. Just look at how Portland got its entire downtown area taken away from them last summer with an “autonomous” zone.

Biden didn’t try to explain why it’s harder and more dangerous. That would require him to admit his failures…and the failures of so many that he shares a party affiliation with. However, you know that he wasn’t going to simply honor the fallen and keep his mouth shut, did you?

He had to mention the January 6 riot. He explained that “your brothers and sisters thwarted an unconstitutional and fundamentally un-American attack on our nation’s values and our votes. Because of you, democracy survived.”

Wow, this is a reach…even for Biden.

Was democracy really ever in question of going away because of the riots? No. Was the attack considered un-American? Not really. We’re certainly not defending the riots. However, the people who carried out the attack actually felt that they were doing the most American thing possible. They believed they were protecting democracy.

And, if Biden wants to continue to abuse his power and continue to push the country toward socialism, it’s only inevitable that there will be more attacks. It isn’t anti-American to want to defend the constitution.

Biden didn’t stop at the riots. He decided that he wanted to layer on some more politics. Families are grieving, but Biden wants to make sure that the country knows where he stands. His last progressive comment takes about climate change. Oh, yes…he went there.

“We’re waking up to the notion that unless we change the environment in which the job can be done, we’re gonna have trouble having enough women and men come forward who want to do the job.”

C’mon, Joe. You can do better than this. The men and women who sacrificed their lives deserve better.

If he wants to change the environment, he needs to address the hostility, not the carbon footprint. How about he makes demands that cities and states won’t defund the police? How about he makes demands that Black Lives Matter won’t infiltrate the government? Nah, he’s not going to do any of that. He’ll provide lip service, but if he was looking to actually honor the fallen, he fell short by a mile.