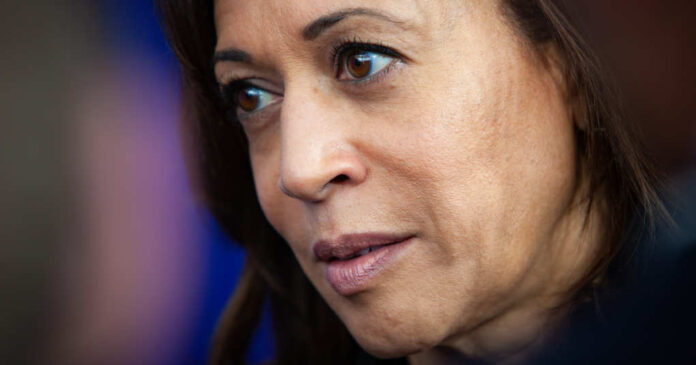 You would think that someone who has served as a prosecutor, a district attorney, a state attorney general, and a senator would have the utmost respect for our nation’s laws and regulations. After all, each and every one of those positions is dependent on the making and keeping of laws.

You would also think that beyond having respect for any laws, such a person would also be intimately familiar with them, knowing far more of them than the average working-class American.

And yet, it would seem that for now-Vice President Kamala Harris, that’s simply not the case, or at least not anymore.

While she used to be a tough-on-crime attorney who often met out extreme punishments to make a point, she now seems to not care one whit whether or not she’s breaking local, state, or federal law. And neither does she care if she drags down a whole slew of innocent people with her.

Our most recent example of proof comes to us as Harris has just released a video supporting Virginia’s gubernatorial candidate Terry McAuliffe.

Now, to be clear, the vice president is one of the few federal executive branch employees who is allowed to comment in a professional capacity on current and upcoming political campaigns of any kind, per the Hatch Act. So the fact that she has made a video favoring one specific partisan candidate is not the problem.

According to the Washington Examiner, the problem is that the video was specifically made to be aired in Virginia’s black churches over the next few weeks, up until the November 2 election. And churches, as not-for-profit, tax-exempt organizations, are not allowed to be involved in politics much.

To be sure, churches are allowed to have political leanings and be politically active even. After all, black churches and those residing in the southern United States have always been known for political activism. But, there are a few guidelines to be followed.

And Harris’s video outright breaks them all.

Per the Johnson Amendment, tax-exempt groups can engage in political activities but only those that support general goals or ideas. For example, they can support pro-life bills or even get-out-the-vote campaigns, as long as they are “conducted in a non-partisan manner,” the IRS website says.

However, partisan activities or ones that show bias are not allowed. These would be any act or message that “(a) would favor one candidate over another; (b) oppose a candidate in some manner, or (c) have the effect of favoring a candidate or group of candidates, will constitute prohibited participation or intervention.”

Now, let’s take a quick look at just a few of the things Harris says in her video, again, which was tailor-made for the black churches of Virginia.

The beginning of her message spells that out quite clearly, as she reminisces about spending time in church as a youngster and singing hymns. But then she goes right into singing, not God’s praises but that of former governor and infamous Clinton confidante Terry McAuliffe.

Among other comments, Harris remarks that “Terry McAuliffe has a long track record of getting things done for the people of Virginia.” Then, she goes into his agenda, which includes things like raising the minimum wage, expanding healthcare, and offering more accessible educational opportunities.

She rattles on for a while about Democratic Party agenda points and then ends by pleading with church parishioners to “vote after today’s service. And if you cannot vote today, make a plan to go vote.”

I mean, I don’t think she can be more blatantly obvious here. She’s mentioning a specific candidate by name, specific party ideas, and telling churchgoers to vote with all the bias one could muster.

And according to one of the nation’s best-known constitutional law experts and liberal scholar, Jonathan Turley, this is a major violation.

As he says, “such direct politicking in tax-exempt churches has been unlawful for decades.” And as such, the IRS has made it quite clear that it won’t be “tolerated.” And to make matters even worse for Harris and church leaders who agree to let this video be shown in their places of worship, Turley says it has all the signs of a “premeditated and unambiguous violation of the federal law.”

Of course, Harris and the rest of the government’s leadership would actually have to care about the laws for them to stick, right? And it is clear from this administration’s actions starting on day one that’s simply not the case.