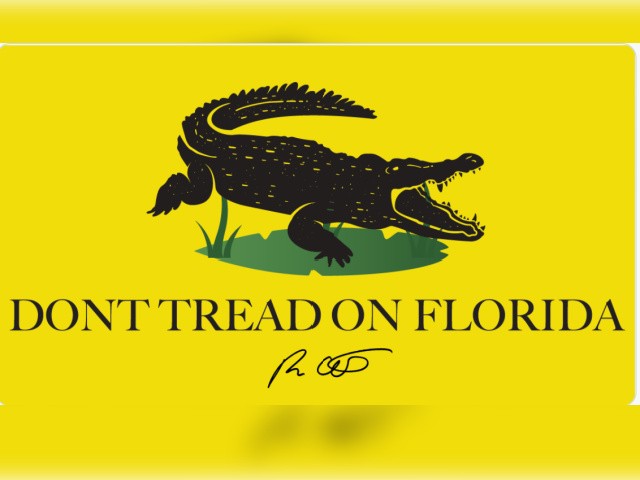 The Florida-themed Gadsen flag was readily apparent on Thursday when DeSantis held a press conference speaking out against vaccine mandates, during which he called on the Florida legislature to hold a special session with the aim of banning vaccine mandates in his state, as reported by Fox News.

During his press conference on Thursday, DeSantis said that people should not “be discriminated against” over a personal medical decision:

At the end of the day, you shouldn’t be discriminated against based on your health decisions. We want to provide protection for people, we want to make it clear that, in Florida, your right to earn a living is not contingent upon whatever choices you’re making in terms of these injections.

DeSantis also said businesses forcing employees to get vaccinated could potentially be held liable if someone has an adverse reaction to the injection.

This past December, when President Biden announced he will have the Department of Labor’s Occupational Safety and Health Administration (OSHA) mandate that private companies with 100 or more employees implement vaccine mandates or require negative tests, he vowed to get Republican governors like DeSantis “out of the way,” should they oppose him.

During a press conference last week, Gov. DeSantis said the state of Florida might sue the Biden administration over its vaccine mandate. “I think that the mandate is going to lose in court,” he said.