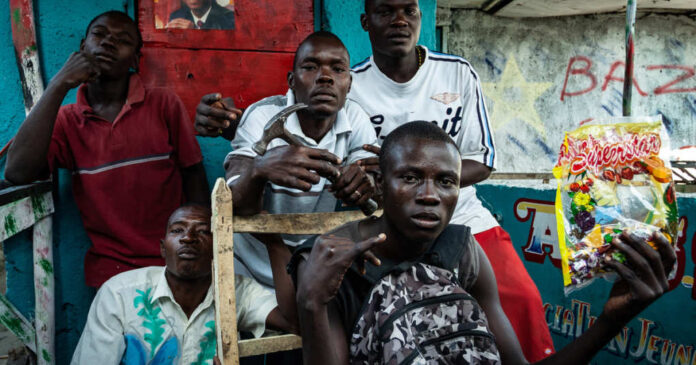 There are reasons why Haiti is not a popular tourist destination. Poverty leads to crime and the tiny impoverished nation has plenty of both. It’s because of Haiti’s destitute population that missionaries from around the world flock to the country to save the unsaved.

Yet despite decades of thumping bibles, passing out food, and teaching orphans to sing cutesy songs, nothing has changed. Life in Haiti has only further deteriorated. God’s washed his holy hands of the country and He’s no longer offering divine protection to any person who thinks they can do better.

A missionary group from Ohio who thought they could make a difference are regretting not listening to the Big Guy’s still quiet voice of warning. They’ve been kidnapped by Haiti’s most notorious gang, the 400 Mawozo Gang. They abducted all 17 of them. Among the missing are five children, one of which is just the tender age of two.

This isn’t the gang’s first escapade of this nature. Earlier this year the 400 Mawozo Gang abducted five Catholic priests and two nuns.

The gang controls a large area of Ganthier known as Croix-des-Bouquets where they extort businesses, routinely carry out kidnaps for ransom, and prey heavily on motorists. Translated, the gang’s name means 400 “inexperienced men.”

The missionary group, Christian Aid Ministries, was snagged en route to an orphanage. The group includes five kids, five men, and seven women. One of the seventeen victims is a Canadian citizen.

In a statement, the organizations said, “Join us in praying for those who are being held hostage, the kidnappers, and the families, friends, and churches affected. As an organization, we commit this situation to God and trust him to see us through.”

Haiti is in turmoil. Following the assassination of President Jovenel Moise, which threw the country into political unrest, quickly followed up by a 7.2 magnitude earthquake that reduced the Haitian population by 2,200, crime and violence are out of control. But nothing rings the register better than a good old-school kidnapping.

Christian Aid Ministries said helping orphans is only a small part of what they do in Haiti. They give seeds to farmers, hold bible classes, and operate a small medical clinic.

Those kidnapped were assigned in Haiti full-time but have resided in the U.S. for the past nine months to the countries political unrest caused by President Moise’s assassination. They were returning to their previous station.

The gang’s leader, Wilson Joseph, is listed among Haiti’s most wanted. He’s wanted on charges including but not limited to, murder, attempted murder, theft, carjacking, and kidnapping. He’s been affectionately given the nickname of “Lanmo Sanjou,” or, “death doesn’t know which day it’s coming,” when roughly translated.

The gang plays rough. They once filled a passenger bus full of bullet holes, murdering an infant in the process. Churches are fun targets too. They’ve been known to abruptly stop church services by slaughtering the worshippers. Setting cars on fire is another favorite. Bonus points if there are passengers inside.

Here’s the problem the gang is having with well-meaning missionaries butting into their affairs. In 2019 Christian Aid Ministries took a beating when one of their God-fearing workers, Jeriah Mast, 40, was convicted of sexual abuse against multiple minors in his home state of Ohio. It was then determined that over the course of 15 years, Mast had also sexually abused over 30 Haitian orphans.