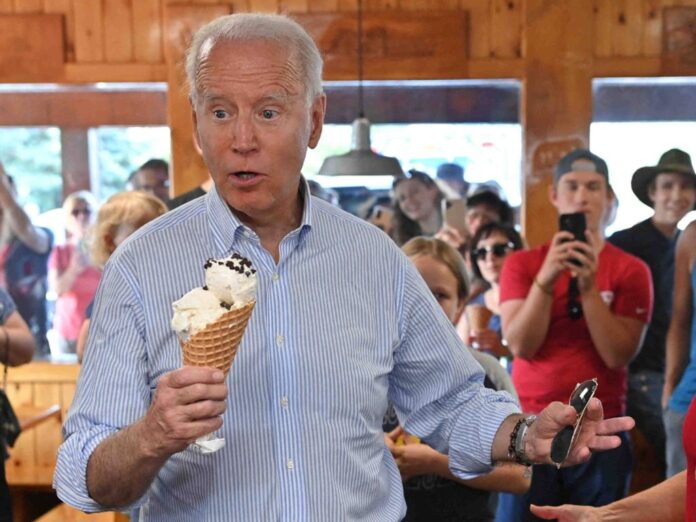 But she did introduce a new argument when trying to explain Biden’s weak performance on the coronavirus — the number one problem he promised to solve.

“COVID — no president, whether it was Donald Trump, Joe Biden, anybody else in the future can get around a pandemic that is a new virus,” Marshall replied.

That was not the line she and others in the media took when Trump was president, and everything having to do with COVID-19 was presumed to be his fault. One PBS host even said that Trump should be prosecuted for mass murder and “genocide.”

Now that 2021 has seen more coronavirus deaths in the U.S. than 2020, even with a massive vaccine program that Trump left behind, Democrats and the media are desperate to avoid holding the president accountable, blaming the unvaccinated instead.

Biden has issued a vaccine mandate, but has not actually released a rule through which to enforce it. And for some reason, he has left the job of FDA commissioner vacant, and not because of Republican obstruction: he just has not nominated anyone.

Likewise with the crisis in America’s supply chains, as over 100 container ships drop anchor off the coast of Los Angeles, and empty store shelves greet shoppers across the nation.

Secretary of Transportation Pete Buttigieg, who took unannounced paternity leave for months in the midst of the crisis, keeps telling Americans the problem is simply the result of increased demand, that it will “persist as long as this pandemic continues,” and that it is simply a function of our globalized economy.

Notably, Buttigieg did not leave anyone in charge when he took time off. There is no one responsible for solving the problem at the ports, and the few reporters who have dared to ask about it have been lectured about the importance of family leave.

Then there’s Afghanistan, where not one U.S. general or diplomat or official has resigned or been fired over the disastrous withdrawal, which allowed the country to collapse, stranded thousands of allies, and led 13 service members to their deaths.

Nor has anyone been held accountable for the horrific incident in which a U.S. drone killed 10 innocent Afghan civilians, after the military and the White House had touted the killing as an example of “over-the-horizon” counter-terror capabilities.

When asked whether he had considered resigning, if only in protest, Gen. Mark Milley, Chairman of the Joint Chiefs of Staff, became defensive. It would be an “incredible act of political defiance” to resign over a president’s military decisions, he said.

Milley, Secretary of Defense Lloyd Austin, and CENTCOM Commander Gen. Frank McKenzie nevertheless made it fairly clear in testimony last month that they believed the president was the one who had made the worst decisions in Afghanistan.

But there, too, there is no one to blame. According to a recent Rasmussen poll, “Only 38 percent [of likely American voters] believe Biden is making decisions, while a clear majority of 53 percent say others are making decisions for him.”

And Vice President Kamala Harris, who would replace Biden if he were ever to resign, has been conspicuously avoiding responsibility for the border crisis, where she was supposed to be fixing the “root causes” of illicit migration from — well, the entire world.

On the rare occasion when a problem becomes impossible to ignore, Democrats use a reliable trick: they declare that they “accept responsibility,” and then do nothing further, expecting — correctly — that the media will credit them for their words.

The late Rush Limbaugh often propounded his “Limbaugh Theorem” of the Obama administration, which is that Obama was never going to be held accountable for his performance, because the historic symbolism of his presidency was too important.

That amnesty has been extended to Biden as well — not because there is anything special about him, but simply because he is not Trump. His only job was to be the other name on the mail-in ballot.

This media also tolerate this wholesale abdication of responsibility because many have been educated to believe that sentiments and symbols — pronouns, for example — are more important than deeds. By that measure, the Biden administration is performing splendidly, even as things are falling apart.

Love him or hate him, the country had someone to blame when Trump was around. And while he passed the buck on occasion, he knew he would be held responsible, regardless. So he held his appointees accountable, too.

The high rate of turnover in the Trump administration — much derided by the media, which kept losing potential sources — was a result of Trump’s well-known habit of firing people who failed.

Suddenly, nothing is anyone’s fault. Is it any wonder we are failing?