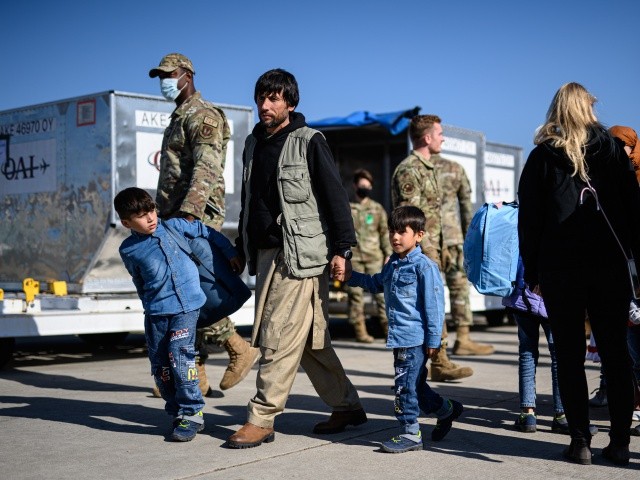 As part of Biden’s massive Afghan resettlement operation, where at least 95,000 Afghans are expected to be resettled across 46 states, thousands are being resettled in American communities on a weekly basis after temporarily living at various U.S. military bases.

In recent weeks, 6,000 Afghan evacuees have left temporary housing sites at U.S. military installations to start new lives in America with the help of nonprofit refugee resettlement agencies, according to Department of Homeland Security data. Another 3,000 U.S. citizens, green card holders and Afghans with close ties in America have left the facilities on their own. [Emphasis added]

Nearly 4,000 Afghan evacuees were resettled in U.S. communities during the past week alone. [Emphasis added]

In addition, the Biden administration has now flown nearly 67,000 Afghans to the U.S. since mid-August with plans to bring thousands more from the Air Force base in Ramstein, Germany. Currently, about 5,000 Afghans are awaiting flights to the U.S.

Meanwhile, more than 55,000 Afghans remain temporarily living at U.S. bases in Wisconsin, Texas, New Mexico, Indiana, New Jersey, and Virginia. Some have already been accused of crimes, such as rape, child molestation, assault, and domestic abuse.

One source close to the resettlement operation told CBS News that the Biden administration is working as quickly as possible to bring as many Afghans to the U.S. as possible. The United States Citizenship and Immigration Services (USCIS) agency is receiving more and more requests from Afghans to secure “humanitarian parole” to get into the U.S.

The parole authority, deployed by the Department of Homeland Security (DHS), is being used to bring most of the tens of thousands of Afghans to the U.S. without them having qualified for refugee status, P-2 visas, or Special Immigrant Visas (SIVs).

Though a group of House Republicans, led by Rep. Matt Rosendale (R-MT), are leading the opposition against Biden’s resettlement operation, Republican governors and 49 House and Senate Republicans have aided the administration’s goal.

While GOP lawmakers in Congress voted last month to give the Biden administration billions in American taxpayer money for the Afghan resettlement, 18 Republican governors told Biden they approved resettling Afghans in their states despite strong opposition from Republican voters.

The refugee contractors resettling Afghans for the administration got a big boost in American taxpayer funds thanks to the GOP-Democrat approved spending bill.

The bill awarded the contractors with about $1.7 billion to “provide culturally and linguistically appropriate services, including wrap-around services during temporary housing and after resettlement, housing assistance, medical assistance, legal assistance, and case management assistance” to Afghans.