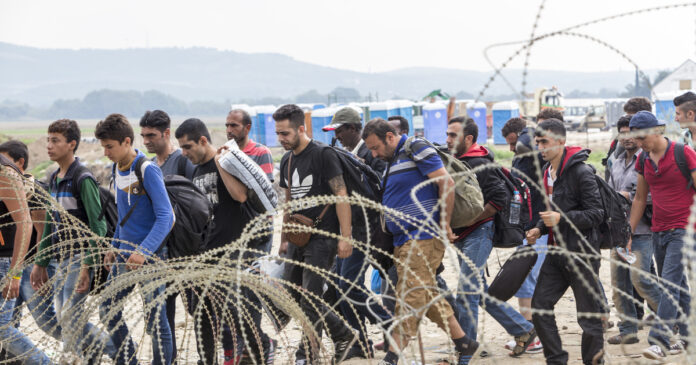 It’s been made about as clear as a sunny summer day that Biden isn’t going to do anything about the surge of illegal migrants coming across our southern border with Mexico. If he was, don’t you think he would have taken action by now or at least made some move to help border patrol agencies like CBP and ICE get the situation under control?

Instead, it seems his every move has been made to deliberately and blatantly ignore the problem.

And yes, it most certainly is a problem.

According to data coming from the border, the month of August saw an uptick in detained migrants by some 430,000 percent compared to last year. Yes, you read that right, 430,000 percent… in just one year.

In August of 2020, about 47,000 illegal border crossers were caught and detained by the Trump administration. And thanks to Trump’s ‘Remain in Mexico’ policy, only 10 of those were then released into the United States.

This year, on the other hand, saw a whopping 195,000 apprehended in August. And thanks to Biden’s lax immigration policies, including his infamous and wholly failing catch-and-release plans, 43,941 were soon after released into cities, small towns, and communities you and I call home.

And those are just the numbers for August – and just for the ones that were actually caught. Thousands more are still roaming our homelands free and clear.

But as records are proving, people are not the only thing crossing the border in increasingly large numbers. Illegal drugs are also making their way into our communities in record amounts.

Here, Sheriff Mark Dannels explains that the county is quickly being flooded with drugs of all kinds and in amounts he and his staff have never even imagined before.

Thankfully, not everyone is willing to just sit back and wait for Biden to make a move in the right direction.

Meet Texas’ Kinney County Sheriff, Brad Coe. Rather than just dealing with the crisis at hand and continually responding to the increased threats his community faces, he’s decided to get proactive and take matters into his own hands.

According to the sheriff and a recent interview he had with The Gateway Pundit, Coe is preparing to take some action of his own. And it starts with deputizing a few of his local community members to help stem the flow of migrants and essentially build a wall around their homes and livelihoods.

Coe has recently put out an announcement that he is willing to hire on ten new deputies from the community, preferably “those that have some kind of either police or military experience.”

He says it shouldn’t have to come to this. But clearly, Biden’s not going to do anything, and he can’t wait around for the day when someone will. He explains that, at this point, with all the crime, drugs, and massive numbers of illegals coming in, he’s been left without “much a choice” but to take “it into our own hands.”

Like hundreds of other community leaders all across the border, Coe is tired of seeing their homes, businesses, and streets overrun with those who don’t care for our laws, our people, or our way of life. Sure, many of them are just looking to build a better life. But if they are going to do it by breaking our national laws and knowingly taking what is not theirs, then there has to be some sort of consequence.

And for those like Sheriff Coe, it has to start with not letting them get here in the first place.

Hopefully, others in surrounding communities will see Coe’s action and be inspired to do similarly. At this point, it’s just about the only chance we have of ending the current border crisis and showing Biden we won’t stand for his inaction.