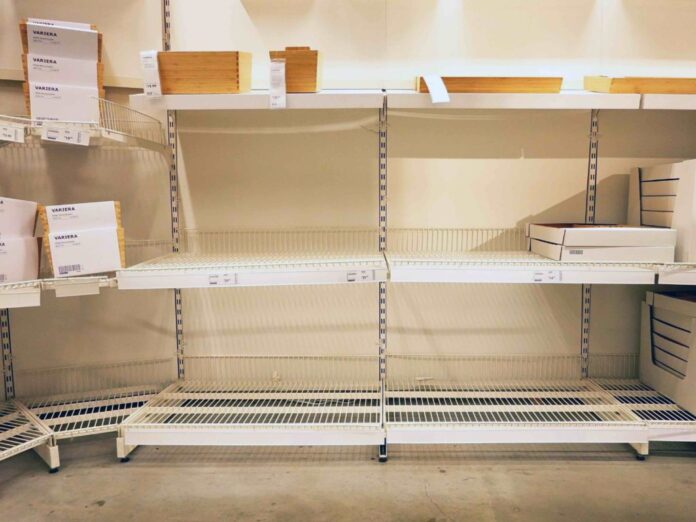 More than merely spinning bad economic news for the benefit of an administration whose left-wing policies they support, these outlets are hoping that the present scarcity will convert Americans away from an allegedly consumerist, wasteful lifestyle toward more socialist, environmentalist habits.

The author, a culinary expert named Micheline Maynard, scolds “pampered” and “spoiled” American consumers who “whine” at shops and restaurants, and suggests that “we’d do ourselves a favor by consciously lowering expectations.” After all, she says, previous generations endured shortages of gasoline, food, and housing: “Now it’s our turn.”
Next, liberal “explainer” website Vox.com declared: “It’s time for Americans to buy less stuff.” Never mind the consequences for retailers, wholesalers, importers, manufacturers, advertisers, delivery drivers, and the whole economy: the “holiday shopping industrial complex” deserved to be cut to size.

Early shopping, author Terry Nguyen asserted, is bad for workers “and the planet.” We can just “buy less,” she explained, adding that “mindfulness” in consumption can bring us greater joy.

The reason there are shortages, she claims, is because Americans are just buying too much stuff. But “spending is not distributed equally,” with rich people buying “discretionary” things while others struggle to find supplies to make school lunches. The problem: “resources get allocated according to little other than profit.”

The advice offered by these writers tracks an ideology known as degrowth, described by conservative radio host Mark Levin in his recent book, American Marxism, as an amalgam of “red” and “green” ideologies: “[T]he goal is to reverse the massive economic progress resulting from, long other things, the Industrial Revolution, which created a huge, vibrant middle class and infinite technological, scientific, and medical advancements that have overwhelmingly advanced the human condition.”

Centrally-planned economies have historically been known for shortages of basic consumer goods, like toothpaste, and the complete absence of others, like tampons.

President Joe Biden is proposing to extend the control of the federal government to more of the U.S. economy than ever before, using massive new spending proposals to expand public funding of health care and child care, and to enforce “green” energy alternatives, rather than the fossil fuels on which the economy now depends.