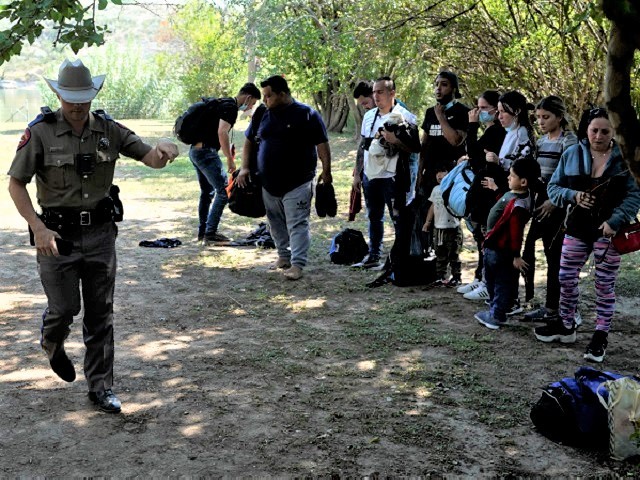 As of October 14, Texas Department of Public Safety troopers arrested 7,744 migrants on criminal charges, according to the October 21 report from DPS officials. The arrests include 1,300 for criminal trespassing and 6,339 on felony charges.

In one such pursuit published by Fox News, a female human smuggler from Austin, Texas, led troopers on a lengthy car chase that ended with a crash.

Fox’s Bill Melugin also tweeted a photo showing a group of 11 migrants apprehended by troopers on a private ranch in Kinney County on Monday night. The migrants, some of whom wore camouflage, attempted to evade apprehension prior to being taken into custody and jailed for criminal trespass.

Smugglers and migrants cause real damage to the ranches and farms, not only along the border but miles inland. A video reported by Breitbart’s Randy Clark shows the mounds of trash and abandoned clothing littering a rancher’s land.

“Damaged fences can result in cattle wandering onto the bordering highway and case vehicular accidents, the article continues. “In those cases, the ranch would be held liable.”

Migrants are also being found on the railroad system that crisscrosses South Texas.

Governor Abbott tweeted a Fox News report showing the apprehension of a multitude of migrants hiding on rail cars near Spofford, Texas.

Such smuggling activities put the migrants at great risk. Less than two weeks ago, a Honduran family suffered devastating injuries while being smuggled on a train in Maverick County, Breitbart Texas reported.

A 32-year-old man lost his hand after his arm was severed above the right wrist. His one-year-old child lost a finger in the same incident. His wife lost a leg from amputation as all three fell from the moving train.

Breitbart has dozens of reports of migrants being found in locked rail cars, often in the sweltering heat, with no water or means of escape.