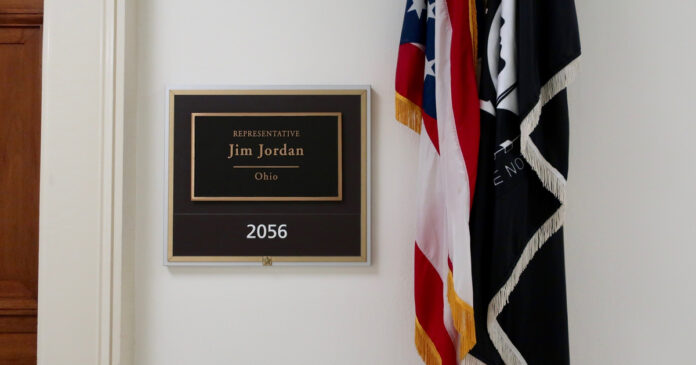 Rep. Jim Jordan of Ohio has a reputation for not pulling any punches when it comes to his interrogation of those before the House of Representatives. But rarely was he in as fine a form as he was when he spoke to Attorney General Merrick Garland on Thursday, accusing the leader of the nation’s legal enforcement arm of the government of creating a “snitch line on parents” through his controversial memo that asked the FBI to investigate parents protests at local schools.

Parents have had quite a bit to protest about in recent months. From mask mandates to vaccine mandates to pornographic books on the reading lists for children to being thrown out of school board meetings and the general assumption that the children in the care of the public school systems can have their decisions made by the government instead of, and often in defiance of, their parents.

Jordan asked Garland about a piece of information from the National School Board Association in which they asked president Joe Biden to involve the FBI in school board matters, and five days later the attorney general did what the school board requested. Jordan went on to say that the Republicans on the committee have sent the AG 13 such letters in the last six months and that people around the country have told him that, for the first time, they are afraid of the government.

“Where’s the dedicated lines of communication on violent crime in our cities — violent crime, that is, went up in every major urban area where Democrats have defunded the police out. Can’t do that, can’t do that, Jordan said. “The Justice Department’s gonna go after parents who object to some racist hate America curriculum. Nope, can’t focus on the southern border, where 1.7 million illegal encounters have happened this year alone, a record … but the Department of Justice, they’re going to open up a snitch line on parents.”

The attorney general was before the committee to speak to his departments’ actions regarding the investigation of the Jan. 6 Capitol Hill riots, but Republicans on the committee took the opportunity to talk to the AG about several controversial issues, including the FBI’s investigation in several other issues.

Jordan referenced that issue, citing the report that the Justice Department made “over 200 errors, omissions and lies in just 29 randomly selected FISA applications,” seemingly to the benefit of those who would doubt the integrity of what the Department of Justice was doing during that time, but Jordan told the AG that he shouldn’t really worry, that the US just put them in charge of a dedicated line of communication to report on the parents and school board meetings, which was no doubt what his mission was supposed to be. The Ohio Republican said that Americans are now afraid of what the Attorney General and his justice department. The Republican asserted that the DOJ has “assaulted” “every single liberty we enjoyed of the First Amendment” over the past year.

Garland attempted to defend himself saying, “I want to be clear, the Justice Department supports and defends the First Amendment right of parents to complain as viscerally as they wish, about the education of their children, about the curriculum taught in their schools,” Garland said.

“I think your memo, Mr. Attorney General, was the last straw. I think it was the catalyst for a great awakening, that is just getting started,” Jordan told Garland, going on to say that if the attorney general continues on his current course the American people are going to stand up against what the Department of Justice is doing, “because Americans value freedom.”