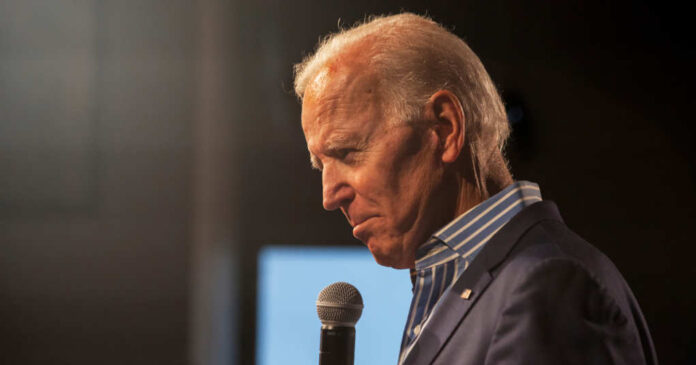 At this point, even the smallest look around will prove to you that Democratic President Joe Biden hasn’t been doing his job and what little effort he has put in has only hurt, not helped America.

I mean, his rushed and ill-planned withdrawal from Afghanistan? Completely disastrous, leading to the deaths of some of Americans finest, as well as staining embarrassment for the entire nation.

Then there’s his stance on fossil fuels and another ill-conceived idea to end its use in America. This, as you well know by looking at your gas receipts, has led to sky-high prices at the pump and for your home’s heating needs. Plus, America is now more dependent than ever on foreign energy sources.

Of course, there’s the whole COVID-19 pandemic situation too.

And it has more than a few people nearly up in arms against our current leader, including many of those who voted for him just a few short months ago.

Take Natalya Murakhver, for example. She wholeheartedly endorsed Biden last year, thinking him to be the better option for America during this time and believing that he would keep his promises.

However, as she recently told Fox News, it’s been nearly 300 since Biden was inaugurated into office, and most of those promises have been left either unanswered or completely ignored.

Murakhver appeared on Fox on Thursday to vent her frustrations with Biden and remind the nation of a few of his campaign promises as well as the indecency he is allowing to be shown to American children everywhere.

She said, “When I consider what (Biden) has done to America’s children, or rather not done, it is heartbreaking.” She reminded people that on that day, it had been about “274 days into his presidency,” and yet we are still being forced to mask up, still “restricting and just curtailing every single freedom our school children have.”

If you remember correctly, “He promised us schools open and children restored within 100 days, and we are way past that deadline.”

And she’s not wrong.

As the Associated Press reported, Biden said way back on December 8 of last year that, if elected, he would make sure “the majority of our schools” would be open within the first 100 days of him being in office. And while he vowed to have Americans mask up for those first 100 days, it implied that after that time, we would be allowed to breathe freely once again.

However, that’s not exactly what’s happened, is it?

Sure, some 274 days later, most American schools are open, but only to some degree. Some still require masks, others limited hours of operation. Some still mandate extreme social distancing, and still, others aren’t even open to in-person learning.

According to Education Week, 16 states and the greater Washington D.C. area still have heavily implemented mask mandates in their schools, as of September 29. And while that means 34 states don’t require masks, only nine of those actually have banned them. This means that it’s really just up to how liberal and anti-science their district superintendents or principles are for most school children in America.

And if that wasn’t bad enough, Biden’s administration is now making plans to begin vaccinating school-age children. Undoubtedly, those school leaders who lean to the left will try and mandate that, as some are already trying to do.

According to Bloomberg, millions of children ages 5 to 11 will be given the opportunity to be double jabbed soon. But, of course, this doesn’t mean masking will no longer be required. On the contrary, actually.

As Fox reported, CDC director Rochelle Walensky said of the proposed pediatric vaccinations, that “right now we are going to continue to recommend masks in all schools for all people in those schools.”

Great. So not only are we considering injecting a vastly unknown substance and one that is proving to be rather dangerous, even deadly in some cases, into our children, we will still be forcing facial diapers on them just to receive an education and all for a disease that rarely and usually not seriously affects children.

Talk about ignoring the science…