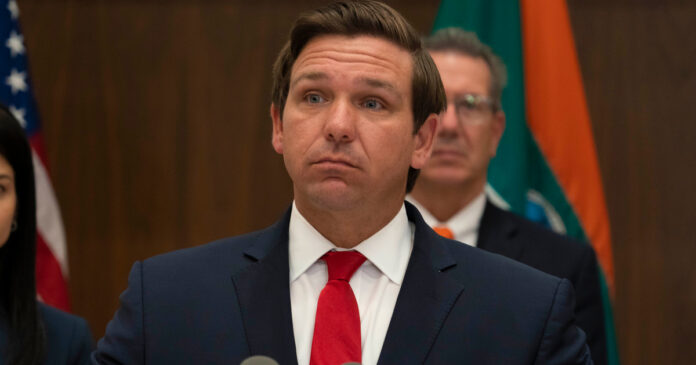 Joe Biden keeps on making a mess of the country, and the Republican governors are trying to correct the messes before they affect the people living in their states. Biden has personally mandated masks for kids in school, masks while on federal property, vaccinations for everyone, and many other things that are best left to personal choice. But the old man thinks like a communist, so it stands to reason that he will act like one.

But Ron DeSantis has had enough of the terrible policies and dictatorship-style mandates that are destroying the people’s livelihood. When Biden stuck his nose into the education system and mandated masks, DeSantis told the school districts that they were not compliant. And when Biden told corporations to fire unvaccinated people, the governor had to step in again and tell Biden to stay away.

The list of mandates has gotten so long that Ron DeSantis is calling a special legislature meeting to deal with the latest vaccine mandate that Biden keeps pushing. It is time to get the Legislature involved and make protecting Floridians a priority.

The Miami Herald stated that “At a Thursday news conference in Clearwater, Gov. Ron DeSantis laid out a litany of legislative policy priorities that would undermine federal requirements that workers be vaccinated against the coronavirus.” They made it sound like DeSantis is the bad guy. But all the governor was telling people was that he would fight for their right to choose.

DeSantis said himself that people need to stand up for themselves and fight back legally. And the way they are taking Biden to the ring is mounting many legal fights against him and his senseless mandates. In addition to the fights, the Florida legislature is staged to take action as well.

The Floridian governor stated, “That’s something that cannot wait until the regular Legislative session next year; it needs to happen soon. So, we will be calling the Legislature back for a special session. We want to make sure individuals in Florida have their livelihoods and jobs protected.”

People have the freedom to work and earn a living in America, and it violates everything the country stands for when a person like Biden takes away personal choice. The president’s forced vaccination mandate has already cost thousands of people their good-paying jobs. But when a president empowers liberal employers to penalize people for making a personal choice, the country is one step away from socialism.

Any delay in passing these laws will make it too late to do anything about the illegal Democratic mandates. The action that the governor wants to see pass mirrors what Governor Greg Abbott did in Texas.

Abbott stated in an executive order that “No entity in Texas can compel receipt of a COVID-19 vaccine by any individual, including an employee or a consumer, who objects to such vaccination for any reason of personal conscience, based on a religious belief, or for medical reasons, including prior recovery from COVID-19. I hereby suspend all relevant statutes to the extent necessary to enforce this prohibition.”

Biden loves to take power where it is not his to have. And by him telling states that they have to comply with his mandates, he attempts to dictate regulations best left to the state powers illegally.

Abbott left any changes to his executive order in his hands, and he has taken the steps personally to protect the people in Texas. Ron DeSantis has done the same, but now it is time for the state to fight back against Biden and tell the nasty old man that he cannot strip the state of its sovereignty.