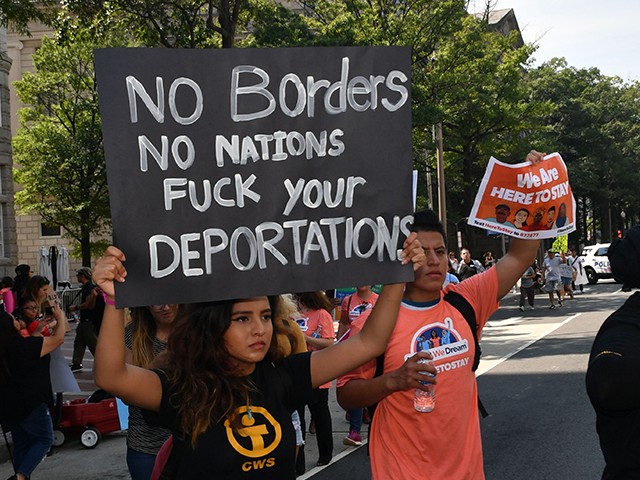 The United States is a “nation of immigrants,” border chief Alejandro Mayorkas claimed in a 39-page report that was prepared for a federal judge who directed in August that the program be kept going:

The fundamental problems with [the program] … is that it puts an international barrier between migrants and their counsel and relevant immigration court where their proceedings are pending and it places their security and safety in the hands of a sovereign nation.

Mayorkas, who is the secretary at the Department of Homeland Security, ignored the benefits to Americans of the program even as he described the risks and harms to migrants.

Those dangers are considerable, and many migrants have been killed or kidnapped after they were sent back to Mexico’s border cities. But wealthy American progressives — including Mayorkas — incentivized those poor migrants to risk their lives by loosening the U.S. asylum rules after 2008. And many more migrants are dying and suffering while trying to reach Mayorkas’s border lottery.

The Secretary has presumed–as is likely–that MPP contributed to a decrease in migration flows … border encounters decreased rapidly, falling 64 percent in just three months … [But] the relevant data is simply insufficiently precise to make an exact estimate of the extent to which MPP may have contributed to decreased flows at the southwest border.

However, Mayorkas’s agency has precise information on the number of migrants it is allowing to compete for Americans’ apartments and jobs. It also has good data on the roughly 400,000 job-seeking migrants — dubbed “got-aways” — who sneaked through the overwhelmed border force.

Mayorkas also admitted the RIM program accelerated the legal review of migrants’ claims for asylum; “MPP did result in some removal proceedings being completed more expeditiously than is typical for non-detained cases.” But he downplayed that benefit for Americans by arguing that migrants must deliver “fair and just outcomes” to foreigners.

But the costs to migrants exceed the benefits, he said: “It is thus the Secretary’s judgment that the benefits of MPP are far outweighed by the costs of the program, in whatever form.”

Mayorkas is a child refugee from Cuba and a pro-migration zealot.

In June, for example, he argued that the dignity of migrants is the “foremost” duty of his agency. In May, he said the agency’s “highest priority” is the return of lawfully deported adults to live with their left-behind children in the United States.

In April 2021, he said migrant-owned companies “are the backbone of our communities — and of our country.” In 2013, Mayorkas declared that Americans’ homeland is “a nation that always has been and forever will remain a Nation of Immigrants.”

Mayorkas wrote the 39-page document to satisfy federal Judge Matt Kacsmaryk. In August, Kacsmaryk directed Mayorkas to restore the MPP or else detain all asylum-seeking migrants until their claims have been decided.

Mayorkas claimed in his October 29 reply to Kacsmaryk that the MPP program is optional because he also has the legal power to “parole” an unlimited number of people into the United States, regardless of the obvious economic and civic damage to his fellow Americans:

Notably, the [legal] statute does not set any limit on the number of individuals DHS can decide to release on parole.

Rather, Congress simply required that parole decisions be made on a case-by-case basis and that they be based on “urgent humanitarian reasons” or “significant public benefit.”117 As the statute does not define those ambiguous terms, Congress left it to the agency to define them.

Mayorkas also described his alternative to the RIM program — the fast-track consideration of many migrants claims for asylum, and their quick release into Americans’ jobs, housing, and schools:

The Department is committed to channeling migration through safe and orderly pathways and reforming our asylum adjudication system to achieve more timely, fair, and efficient results …

As part of these efforts, the United States is working bilaterally and multilaterally with countries across the Western Hemisphere, seeking to encourage humane border enforcement and enhance legal pathways [emphasis added] throughout the region

Mayorkas also wants to open a new doorway to citizenship at the border by giving his pro-migrant deputies the authority to grant citizenship on the spot to a very large number of migrants, without any pushback from judges, or review by groups that recognize the economic harm of migration. He says in the memo that he has drafted regulations:

Allowing [migrant] cases with positive credible-fear findings to remain within USCIS [DHS’ U.S. Citizenship and Immigration Services agency] for the full asylum merits adjudication, rather than being shifted to immigration judge-review …

Once implemented, the Asylum Officer Rule is expected to represent a transformative and lasting shift in asylum claim processing that will ensure rapid and fair processing in a way that delivers appropriate outcomes and realistically keeps pace with the workflow. …

Achieving the rule’s objectives will require substantial investment in resources, training, and personnel; to fully implement this new process, USCIS will need to quadruple the current asylum officer corps.

For many years, a wide variety of pollsters have shown deep and broad opposition to labor migration and the inflow of temporary contract workers into jobs sought by young U.S. graduates.

This opposition is multiracial, cross-sex, non-racist, class-based, bipartisan, rational, persistent, and recognizes the solidarity Americans owe to each other. The polling — and the census data — debunks the 1950s claim by Mayorkas and other advocates that Americans must live in a “nation of immigrants.”

Yet business and progressive groups repeatedly insist that 300 million Americans must subordinate their priorities to the goals of migrants. “Citizenship Day is a reminder that the job of every single one of us is to ensure that America remains a country worthy of immigrants’ aspirations,” Biden said in a September 17 video.