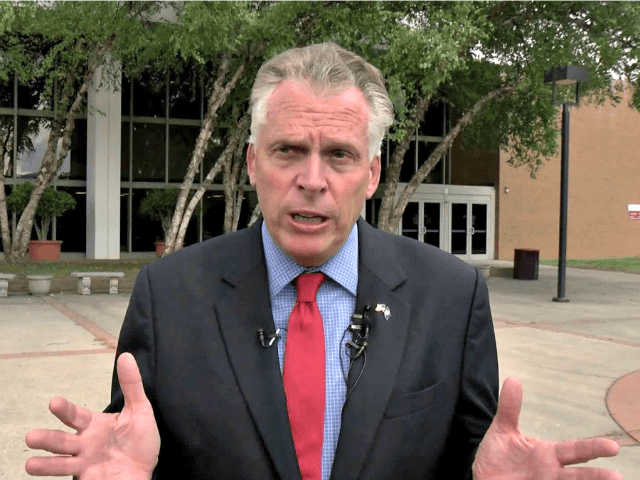 “Terry McAuliffe has a history of accepting foreign contributions. The FEC must fully investigate these serious charges that he accepted $350,000 in illegal foreign contributions for his current campaign,” said Paul Kamenar, an attorney representing the National Legal and Policy Center.

In the United States, political candidates may not accept funds from foreign nations and entities. However, if foreign funds are donated by a U.S.-based subsidiary that is run by American leadership, donations can be finagled. Such a workaround “can be a murky legal distinction,” the Free Beacon reported.

LycaTel LLC, an entity owned by a Sri Lankan-British national, reportedly donated $350,000 in July to McAuliffe. The Free Beacon reported the entity is a subsidiary of the owner of a “U.K.-based telecom conglomerate, which boasts a complicated web of offshore businesses and has been the subject of tax-fraud and money-laundering charges in France.”

Allirajah Subaskaran, the reported mastermind of the web of entities, also reportedly owns additional companies in other sectors, which have come under scrutiny in France for alleged unpaid taxes. During the French investigation, French officials arrested “19 people suspected of being involved in a money-laundering system implicating Lycamobile and Lycamobile Services,” French prosecutors stated.

Activity linked to the alleged fraud was reportedly photographed in the United Kingdom. The reported images indicate weekly toted bags of cash that could be worth up to $1,000,000. All parties have denied wrongdoing.

Request for comment on the ethics complaint was ignored by McAuliffe’s campaign.

The ethics complaint comes as McAuliffe’s campaign is reeling from the tiki torch stunt on Friday. Images of the hoax reveal five people, including at least one Democrat operative, held tiki torches in front of candidate Youngkin’s campaign bus to remind “Virginians what happened in Charlottesville four years ago,” the Lincoln Project said, admitting to producing the scene.

But the Lincoln Project took former President Trump’s comments out of context. A transcript of Trump’s words revealed the president said, “You had some very bad people in that group, but you also had people that were very fine people, on both sides.”

The failed stunt was exacerbated by McAuliffe’s communications director being forced to apologize for bigoted tweets on Friday.

“I want to profoundly apologize and use this as a moment to grow and learn from my mistakes,” Renzo Olivari told Breitbart News. “When I was in high school student, I tweeted things that were clearly unacceptable. I am ashamed and I profoundly regret what I tweeted.”

On Breitbart News Saturday, Youngkin spoke about McAuliffe’s sinking campaign. “These [are] political tricks that are just divisive and beyond pale have no place in Virginia or any politics, and Terry McAuliffe is showing his true true colors, and people are rejecting it,” he said.

“Virginians are absolutely rejecting this partisan, divisive politics that’s been the trademark of Terry McAuliffe’s 43-year political career. I mean, he’s the Godfather of [the] modern day progressive Democratic Party, and he’s seeing it all fail,” Youngkin added. “He’s seeing it crash down on him because Virginians are rejecting it.”