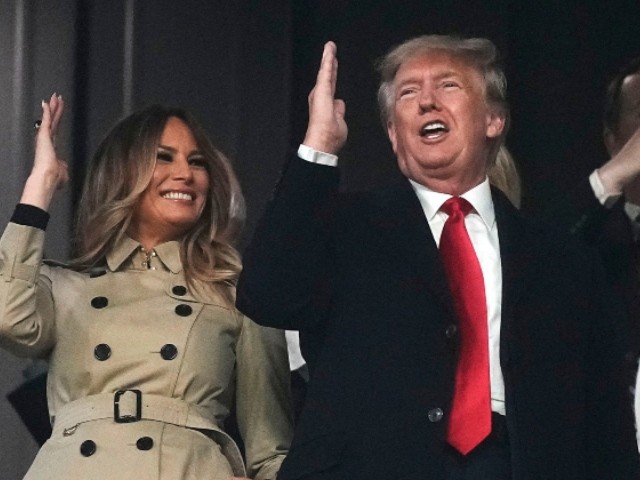 As Braves fans performed their signature “Tomahawk Chop” during Game 3 of the World Series in Atlanta, Donald and Melania Trump decided to join in.

“Looking forward to being at the World Series in Atlanta tonight. Thank you to the Commissioner of Baseball Rob Manfred, and Randy Levine of the New York Yankees, for the invite,” Trump said in an email to supporters on Saturday. Melania and I are looking forward to a wonderful evening watching two great teams!”

The move firmly places Trump on the opposing side of one of the left’s designated culture war battle zones. The elimination of the Braves name and their fan’s signature “chop” has long been an aim of the radical left. By partaking in the famed chant, Trump has done what he so often did as president: Oppose the left and their radical agenda aimed at stripping away any semblance of fun from American sports.

The visit to Atlanta’s Truist Park also allowed Trump to publicly show support for his friend Herschel Walker, who is running against Democrat Senator Raphael Warnock in Georgia.

ATLANTA, GEORGIA – OCTOBER 30: Former football player and political candidate Herschel Walker interacts with former president of the United States Donald Trump prior to Game Four of the World Series between the Houston Astros and the Atlanta Braves Truist Park on October 30, 2021 in Atlanta, Georgia. (Photo by Michael Zarrilli/Getty Images)

ATLANTA, GEORGIA – OCTOBER 30: Former president of the United States Donald Trump waves prior to Game Four of the World Series between the Houston Astros and the Atlanta Braves Truist Park on October 30, 2021 in Atlanta, Georgia. (Photo by Michael Zarrilli/Getty Images)

Trump last appeared at a World Series game in 2019, when he attended Game 5 of the World Series between the Astros and the Nationals.