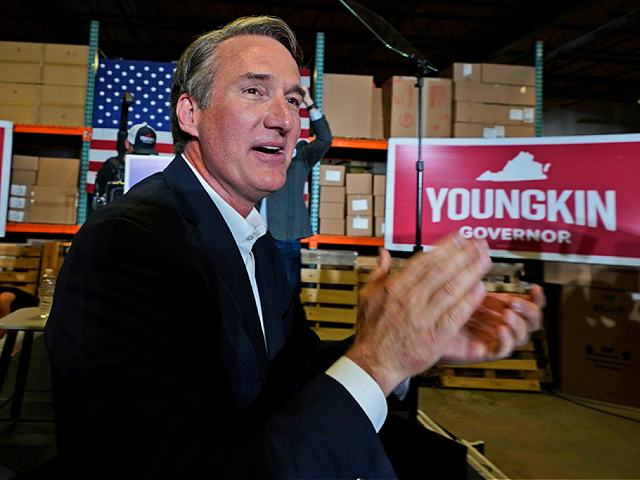 NBC and MSNBC’s political analyst Julian Castro suggested Democrats lost because the media was not effectively controlling the “narrative.”

“Youngkin has shown Republicans that they can launder dog whistles through huge unregulated platforms, driving base turnout–even while distancing from Trump,” he said.

Richard Signorelli insinuated the election was lost due to “Trumpism.”

“The only way to defeat Trumpism is to hold him & his accomplices accountable for their federal/state criminality STAT,” he claimed.

Larry Sabato, a professor of Politics at the University of Virginia, told MSNBC’s Rachel Maddow the race turned into a “bloodbath.”

“I will tell you somebody high up in the McAuliffe camp that is there with McAuliffe … put it this way to me,” Sabato said soberly, “It’s a bloodbath”:

In the closing days of the race, Youngkin made incredible strides to overcome a Virginia electorate that voted by double digits to elect President Biden in 2020.

Several polls on Monday indicated Youngkin would reclaim the governorship from Democrats. FiveThirtyEight’s average polling revealed Tuesday Youngkin’s lead of 49.9 percent to 49.0 percent, a narrow lead for the Republican on election day.

Previous polls also indicate Youngkin was leading in the race. Trafalgar Group polling group on Monday marked Youngkin with 49.4 percent of the vote and McAuliffe with 47.1 percent. Fox News polling on October 28 also showed Youngkin had a one-point advantage (48 percent to 47 percent).

Youngkin steadily performed better in the polls as the race came to an end. On October 15, for instance, Youngkin trailed the Democrat by three points and more than four points on August 15.

McAuliffe’s shrinking advantage reflected his faltering campaign in the days leading up to Tuesday. After making the race primarily about Donald Trump, McAuliffe changed his tune over the weekend and said the race was no longer about Trump.

On Saturday McAuliffe stated his campaign is “not about Trump” and then doubled down Sunday on CNN. “I’d love to have him come in,” McAuliffe said of Trump. “But you know … this is not about Trump.”

McAuliffe’s shrinking polling advantage was likely due to the campaign ignoring state issues, such as education and the parental right to direct their children’s education.

McAuliffe’s campaign was nearly upended with Attorney General Merrick Garland granting permission for an FBI probe into parents that was predicated on a faulty memo from National School Board Association (NSBA) that labeled parents “domestic terrorists.”

The NSBA wrote the memo about parents who were concerned about critical race theory (CRT) being taught in schools.

People hold up signs during a rally against “critical race theory” (CRT) being taught in schools at the Loudoun County Government center in Leesburg, Virginia on June 12, 2021. (Photo by ANDREW CABALLERO-REYNOLDS/AFP via Getty Images)

But McAuliffe denied CRT was being taught to Virginia students. “It’s not taught here in Virginia,” Terry McAuliffe claimed about CRT. “We can ask about any topic. Here’s what I’ve said all along, and it really bothers me — this whole idea of stirring parents up to create divisions.”

Youngkin took the opposite position, calling out Garland for cozying up to the teacher unions. In a Fox News op-ed Monday, Youngkind wrote Virginians “must empower parents, and address their concerns about school safety, the school curriculum and the decline in standards and results in Virginia schools.”